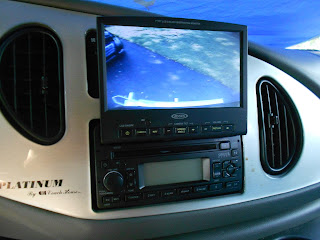 We’ve missed a few camping outings due to a death in the family, which has left a big hole in our lives. We miss Jane terribly, and are just beginning to imagine how we will manage without her.

We did spend a weekend at Lincoln State Park to find some solace, and it was a good idea to get away for a few days to contemplate quietly with the placid waters of the lake in view.

Back at home, we’ve got a yard full of vehicles on display, taking up two driveways. There’s three cars plus the motorhome which had to be moved this weekend because our storage facility is repaving their lot. 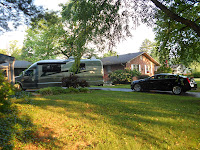 Turned out to be good timing, though. It gave us a chance to switch out the dashboard radio, which we expected to be a day-long ordeal including multiple trips to Lowes, like most of the projects we undertake.

The radio in the dash houses a flip-up LCD panel that connects to our back-up camera on the coach. Even though we’re only about 30’ in length, including the new motorcycle rack, the rear camera is a necessity for almost everywhere we try to park or turn around. We simply can’t see what’s behind us without it, and this requires one of us to jump out of the coach and shout confusing instructions to the driver – “NO, TURN TO YOUR LEFT!!!”

The LCD panel had been acting up recently, stubbornly refusing to eject from the dash even with repeated coaxing, and last weekend it failed completely. I tried the usual rounds of Google searches for repair hints – turns out lots of motorhomes use this Jensen model – and I even called the manufacturer for tech instructions. In short, it’s unrepairable. Must be replaced entirely.

The local car stereo shop wanted about $1000 to install a new radio and mount a separate LCD panel to dash. Not the best option. Then I found a couple of Jensen replacements online, but they were upwards of $700. Sheesh! At last I stumbled on an outfit in Canada that was having a one-day sale for an Innovatek model that looked identical to the original in-dash Jensen – only $129. Woo Hoo!

I added it to my shopping cart online, but of course I had to poke around for a “better” deal before I pressed go. When I returned to the Canadian website a few minutes later, the price had jumped $40, and then before my eyes it was changed to “No Longer Available” !!  I panicked and called their customer service. A French-accented woman listened to my garbled story and then told me to “Press submit on the shopping cart NOW, NOW, NOW!!”

I’m still not clear what was going on, but we got the radio for the low, low price and it was delivered overnight via DHL for free.

Turns out the installation was simple as could be. The old radio popped right out of the dash, and the new one slid in like butter. Three quick plug-in connections and we were finished!