Two record breaking snowfalls have melted away like the Wicked Witch, defeated by buckets of rain and a blowing gale worthy of Dorothy. The happy relief of warmer air has unhappily combined with a deluge of rain and melting snow to form a thick fog that clings to the lowlands like old tapioca.

From the front porch I can hear a nearby tributary rushing full throttle at flood stage to join our creek in the Bottoms at the lower echelon of the farm. The Bottoms are a section of pastureland below the mossy limestone cliffs and beyond the ancient spring house, and from our back deck I can see the fog expanding along the creek there. 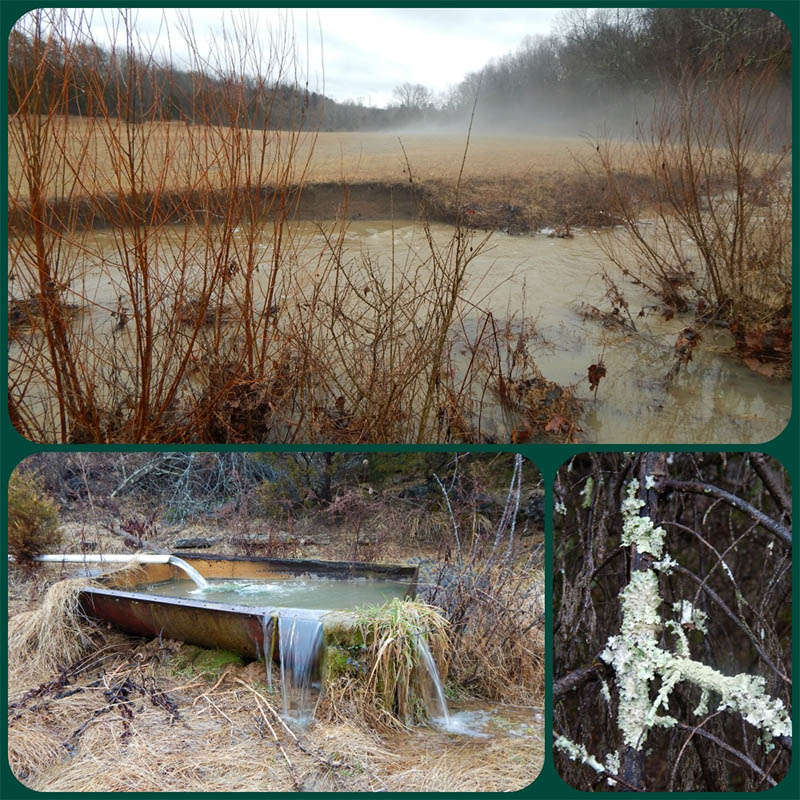 On the backside of the house a surprising new lake formed overnight. Dubbed Lac du Splishy-Splash, it is trying to find its way to the Bottoms via a good-size muddy trough. Unlucky this, as we were planning to locate a new fruit orchard in about that spot, which now seems unwise. 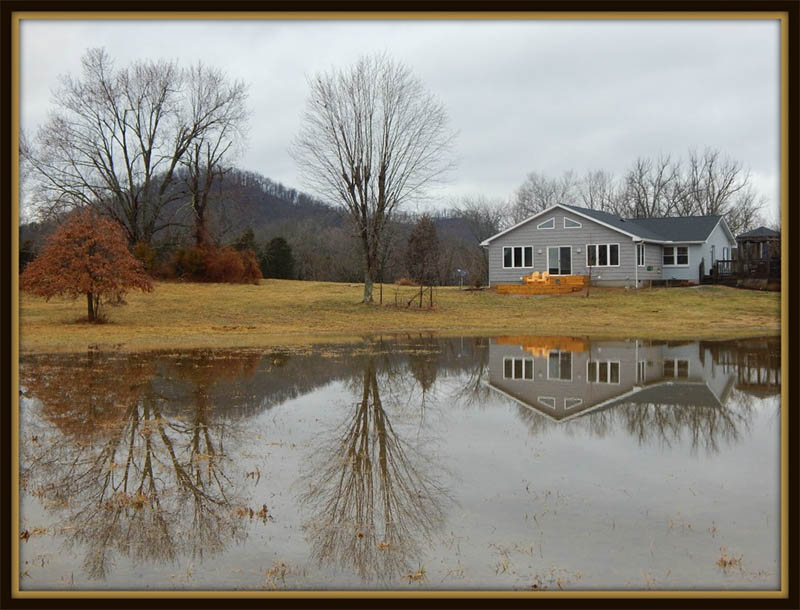 Beyond this temporary lake sits the Big Barn, where a family of foxes has taken up residence in a former calf crib. We see their footprints in the dirt floor and occasionally spot stray feathers from what must have been a fine feast of local wild turkey.

Following a loosely mowed trail behind the barn is another lively little stream, found today to be leaping over rock ledges and forming fetching waterfalls, a pleasing byproduct of what is essentially too much water. Crossing the stream and passing through a thicket of cedars you come at last to Dancing Mantis Meadows, where our log cabin sits prettily on a perch between rolling hillsides and dense forest. 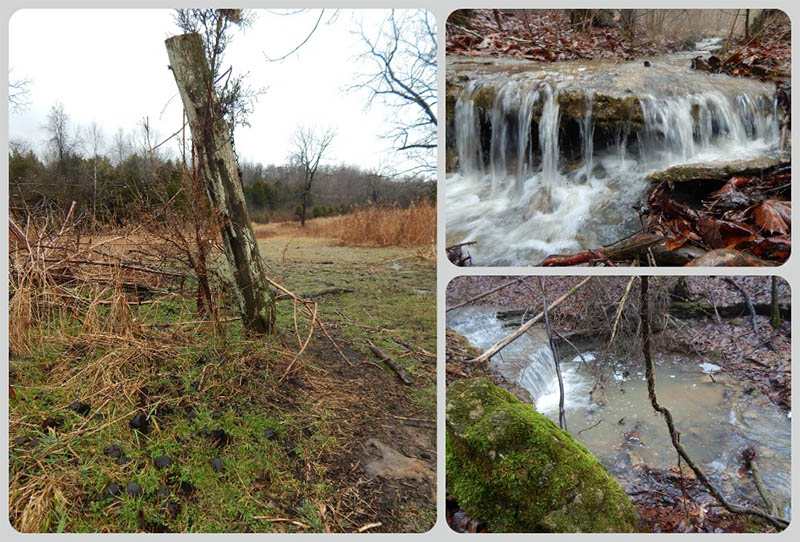 This round-about tour of the farm is an odd way to announce that our motorhome, the Flying Mantis, is back home from its service call, waxed and primed for our next trip. We’ll hope the fog has lifted by then!

It’s five minutes past March, and somewhere a daffodil is tapping its wristwatch.
-The Washington Post

Snow is becoming a four-letter word around here, uttered with chilly contempt as yet another historic blizzard has lavishly blanketed our corner of the Near South.

The remnants of the last storm had just melted and the air was warming to a tolerable degree such that it was possible to step outdoors without fear of frostbite. Then, in a deliberate and malicious maneuver by Old Man Winter, twenty inches of the dreaded stuff was thrown down yesterday. Take that, Spring!

It’s a knock-out punch, making travel impossible and keeping us homebound for the next few days with a stockpile of groceries and a ready-to-pop pregnant cat. 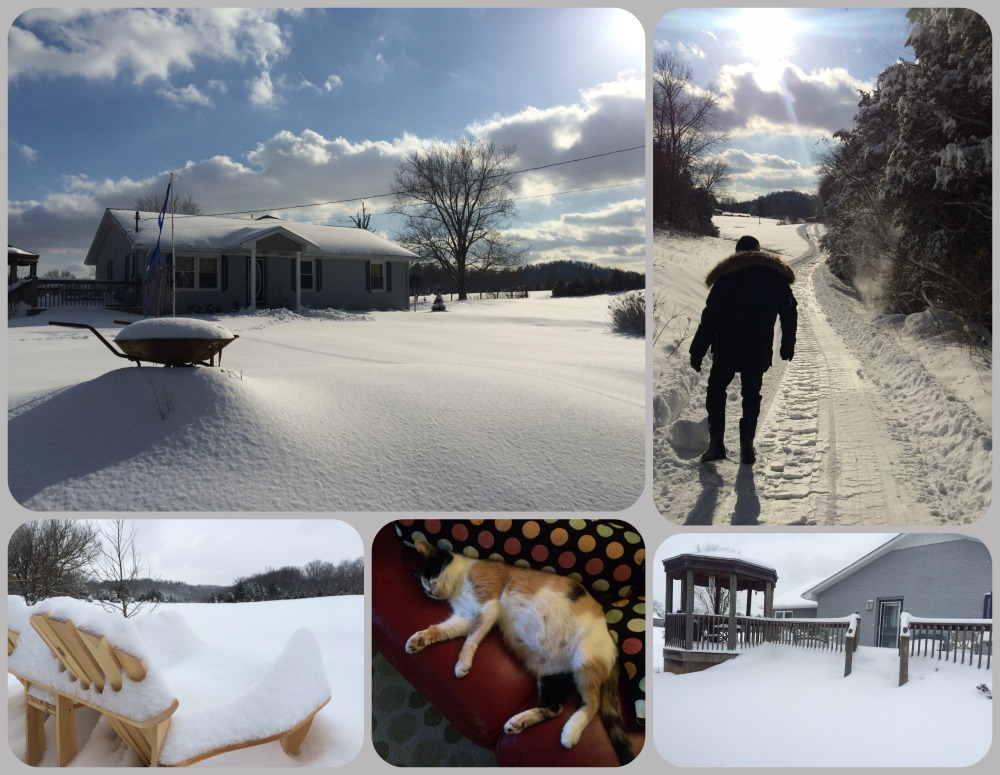 With negative-number temperatures, our forays outdoors are limited to a few minutes of shoveling and a brave walk up to the mailbox, which is a quarter-mile away. A thoughtful and generous neighbor has plowed a path for us with his tractor, and I’ll be baking a sumptuous cake for him this afternoon as a small token of our deep and abiding appreciation.

Nearby the main North-South route, I-65, is a 30-mile graveyard of stranded semi-trucks and hapless motorists who found the local hills impossible to climb. The National Guard has been called out for rescue and retrieval, and word is the highway will re-open sometime in late summer. Or maybe sooner if they can figure out where they left the snowplow. 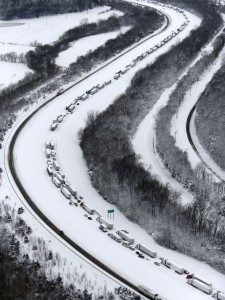 At the moment, the RV is tucked away at the dealer awaiting its annual maintenance. They called to apologize for a delay in service, due to the weather, and I’m thinking it may be a week or so before we’d be able to slide it down our driveway anyway.

Just in time for our next adventure at the end of March –  We‘ll be heading farther south, hoping that the S-word won’t follow! 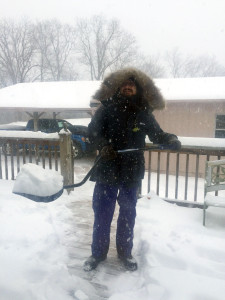 Fifteen inches of snow is unusual in our part of the South. But that’s what came down hour after hour yesterday. Fine powdery snow fell heavily from dusk till dawn, until it had piled up over a foot deep.

The RV carport did its job well, keeping the coach snug and out of the elements. And since the snowpack is so light and fluffy, we’re not worried about the load on the roof. 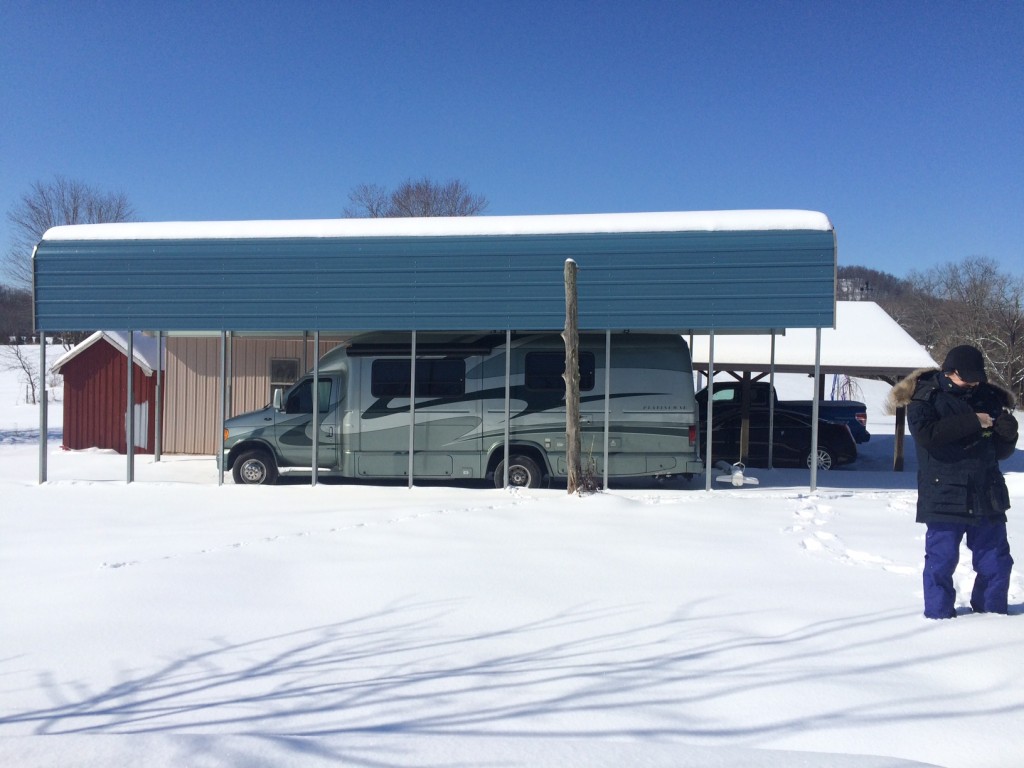 Our driveway, however, is another matter. We’ve got a quarter-mile long gravel road and no way to plow it. Yesterday’s excursion in the 4-wheeler left a line of tracks to follow on foot today. Bundled up in parkas and snow pants, we trudged up to the mailbox on the main road and found…no mail. No surprise really, they’ve closed just about everything in this part of the state. 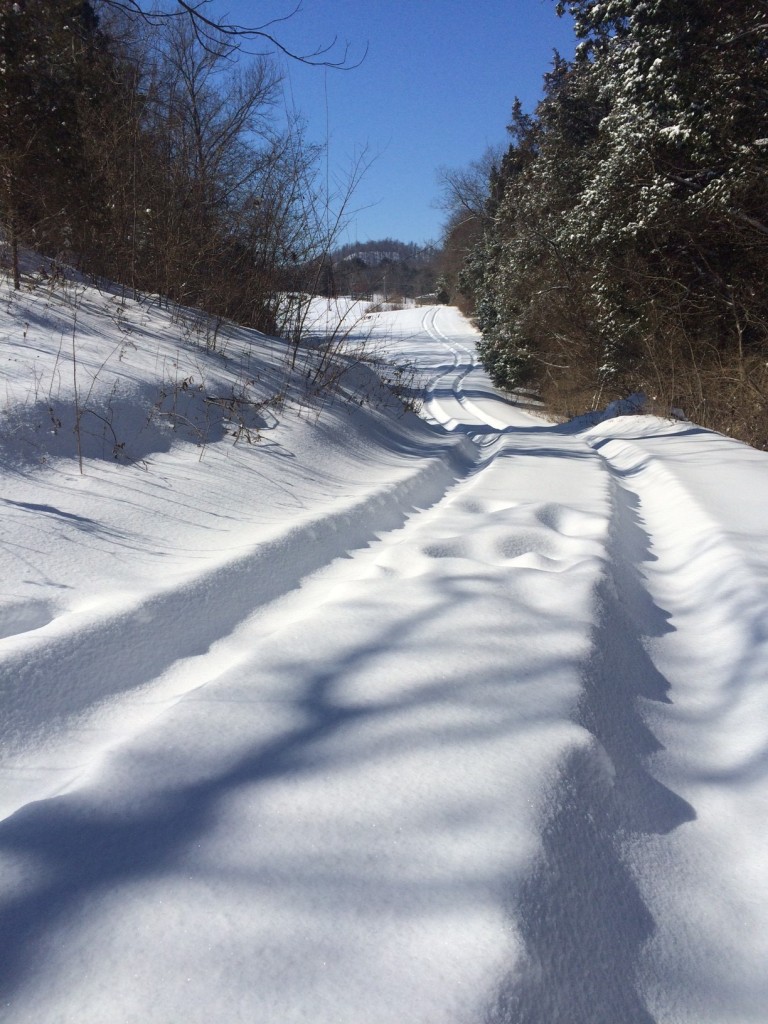 It will take a few days to dig ourselves out. Just in time to take the motorhome out for its service call. And maybe close on the City House at last! 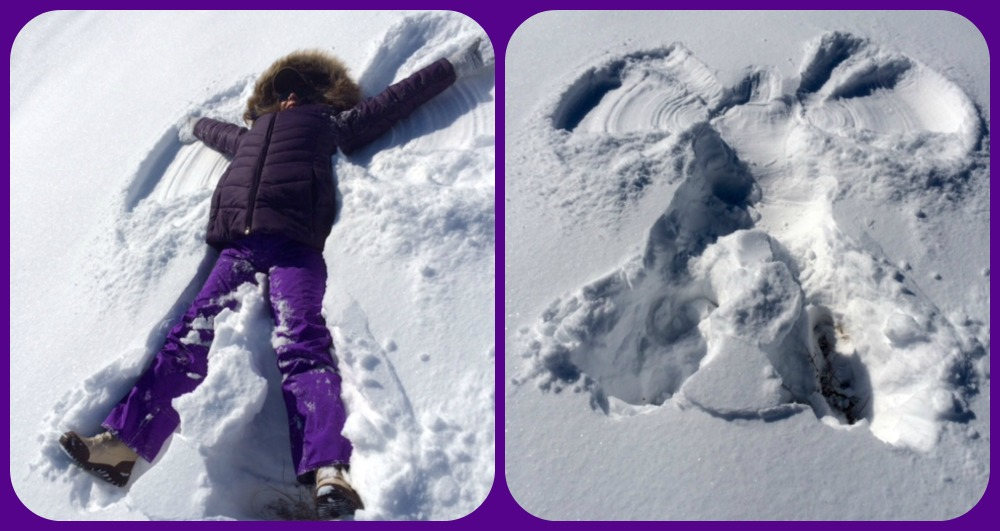 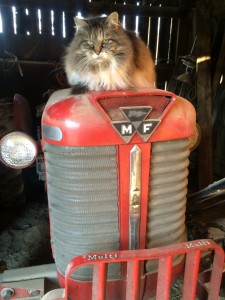 This month the RV is waiting patiently for our next outing. It’s scheduled for maintenance in a couple of weeks – annual oil change, fix the leveling jacks which are continually out of whack, and replace the big mud flap that got yanked off when the rear tire blew out in Wheeling, WV. And of course the yearly wash & wax. It’s a bit expensive to have such a large vehicle professionally waxed, but we like to protect the fancy paint job and besides I’m not especially keen to hand-rub a whole motorhome.

Meanwhile there’s a list of varied and novel tasks to be performed around the farm. Last week, during an uncommonly temperate day, we cleaned up the immediate yard surrounding the house.

There’s an ancient apple tree in the back, gnarled and tangled like an old ball of yarn, and its location coincides with the new orchard we’ll be planting in the Spring. So I read up on pruning techniques and attempted a rescue on the old gal. We’ll find out later this summer if my efforts bear fruit! 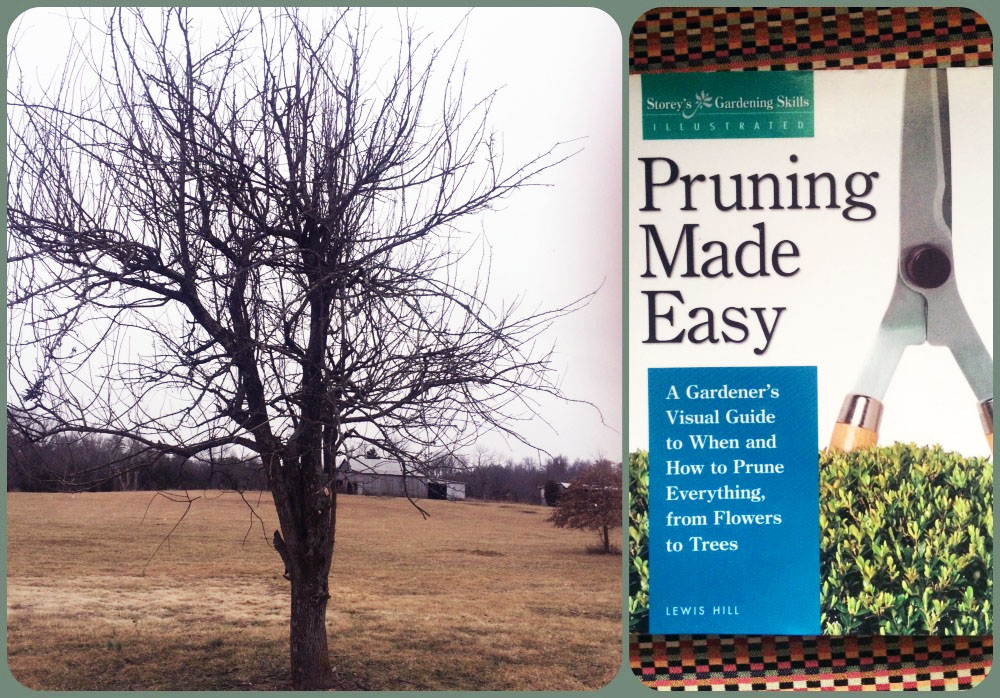 A rusty wheelbarrow atop a prominent stump will be a showy spot for flowers. All I need to do is place a bag of potting soil inside and cut a few slits in the top. Insert plants and voila – instant flower bed! 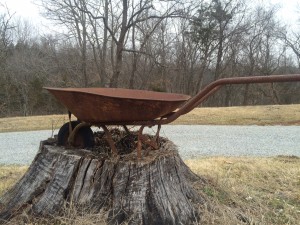 Came across a swell flagpole stored in the garage. And found a bag of stunt-kite tails in a steamer trunk. Put the two together and we’ve got a kind of maypole. Or, as I like to think of it, a Study in Self-Tying Knots. Adds a festive touch to the front of the house, don’t ya think! 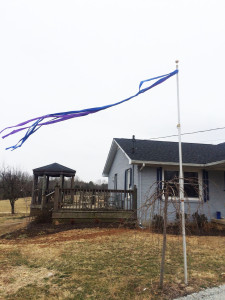 Local business is keeping us close to home – we’re waiting to close the sale on our city home to be exact. Otherwise I’d be happily on my way to Florida in the motorhome this week. So in the interim we’re enjoying Farm Life, snug in the new house with chill winter winds howling outside.