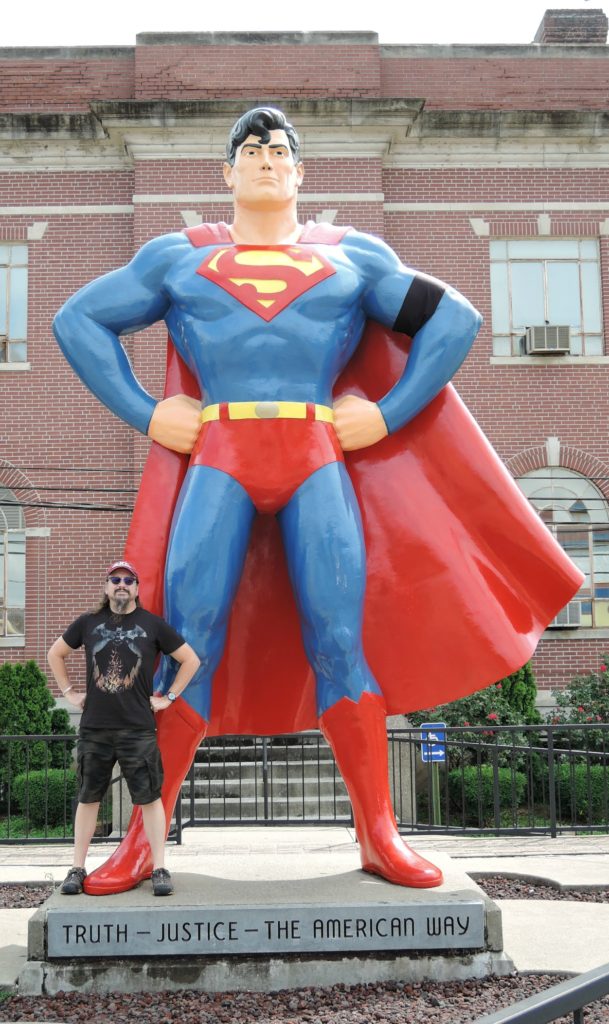 Metropolis Illinois shares its name with Superman’s hometown, and that’s about where the similarities end. However that hasn’t stopped tiny Metropolis (pop. 6500) from celebrating its connection to the champion of Truth, Justice, and the American Way.

In the center of town stands a 30 foot Superman statue. The statue has been replaced a few times because it proved an irresistible target for yahoos who wanted to see if the Man of Steel could really stop a speeding bullet. After a couple of statues succumbed to incoming fire, the city commissioned the current one made of bronze, not steel. 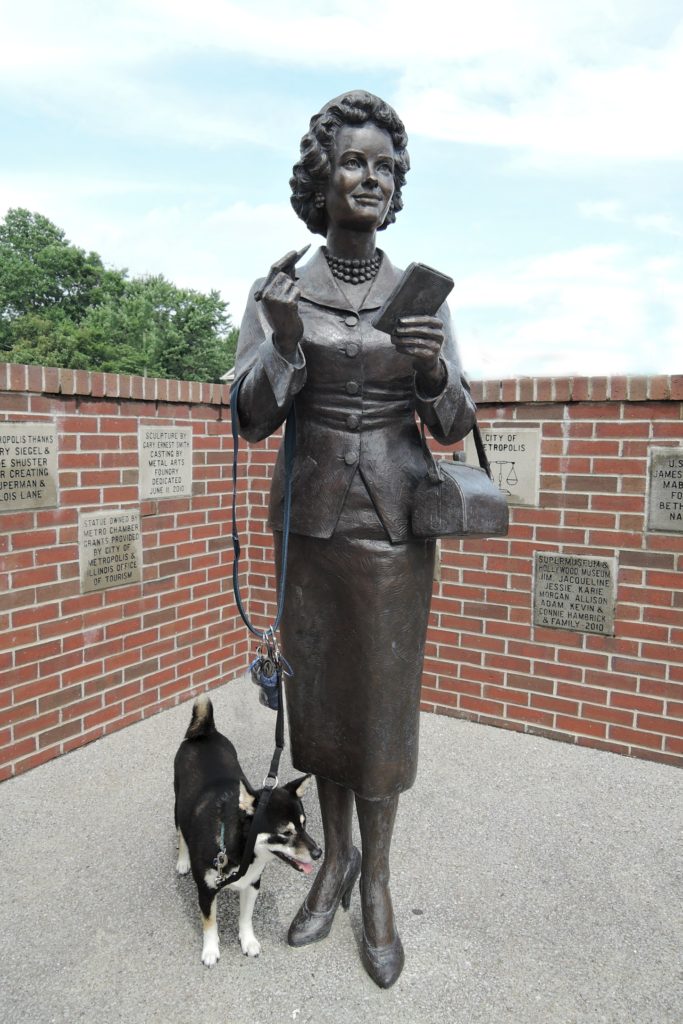 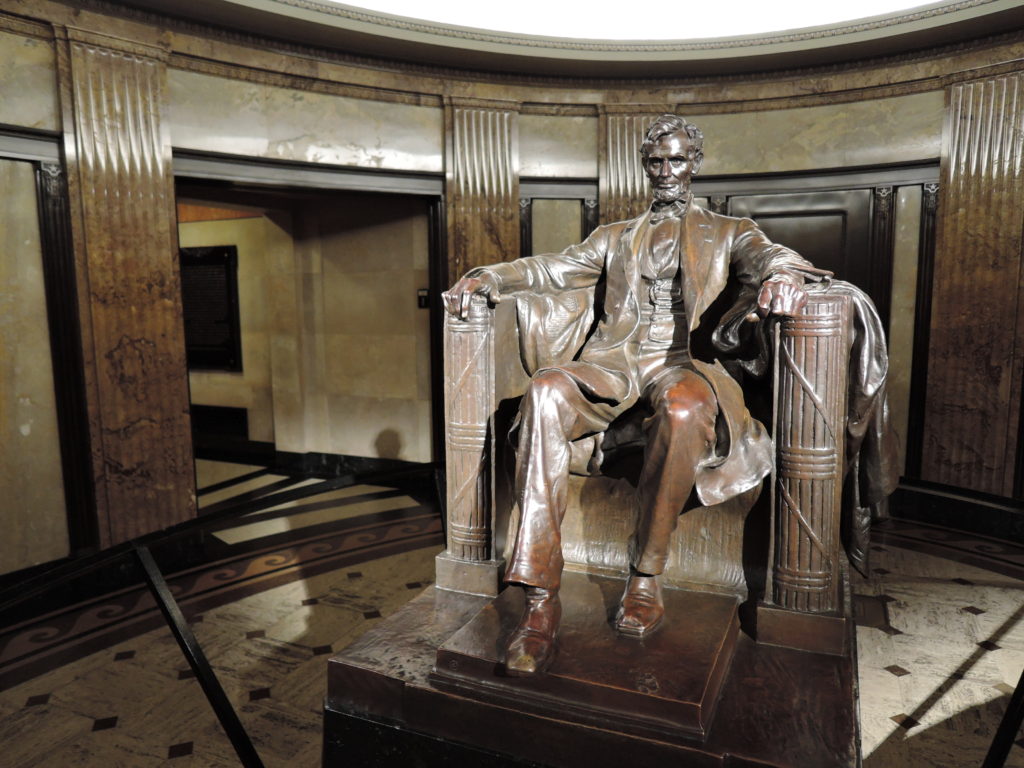 The Illinois State Fair, held in Springfield, is one of the country’s largest. We arrived too late to visit the fair, but took advantage of their large and mostly empty campground. I asked the camp hosts how the Fair was this year and they replied in unison, “Terrible!” It was in fact a disaster, qualifying for a FEMA rescue. On opening day the fairgrounds had 5 inches of rain in 90 minutes. There was so much rain so quickly it blew the manhole covers off the sewers. Carnival vendors and livestock exhibitors who were camped in a low-lying area had all their equipment destroyed by flood and the fair closed down for several days. When we arrived a week later there were still deep muddy ruts in the grass where RVs had to be towed out. 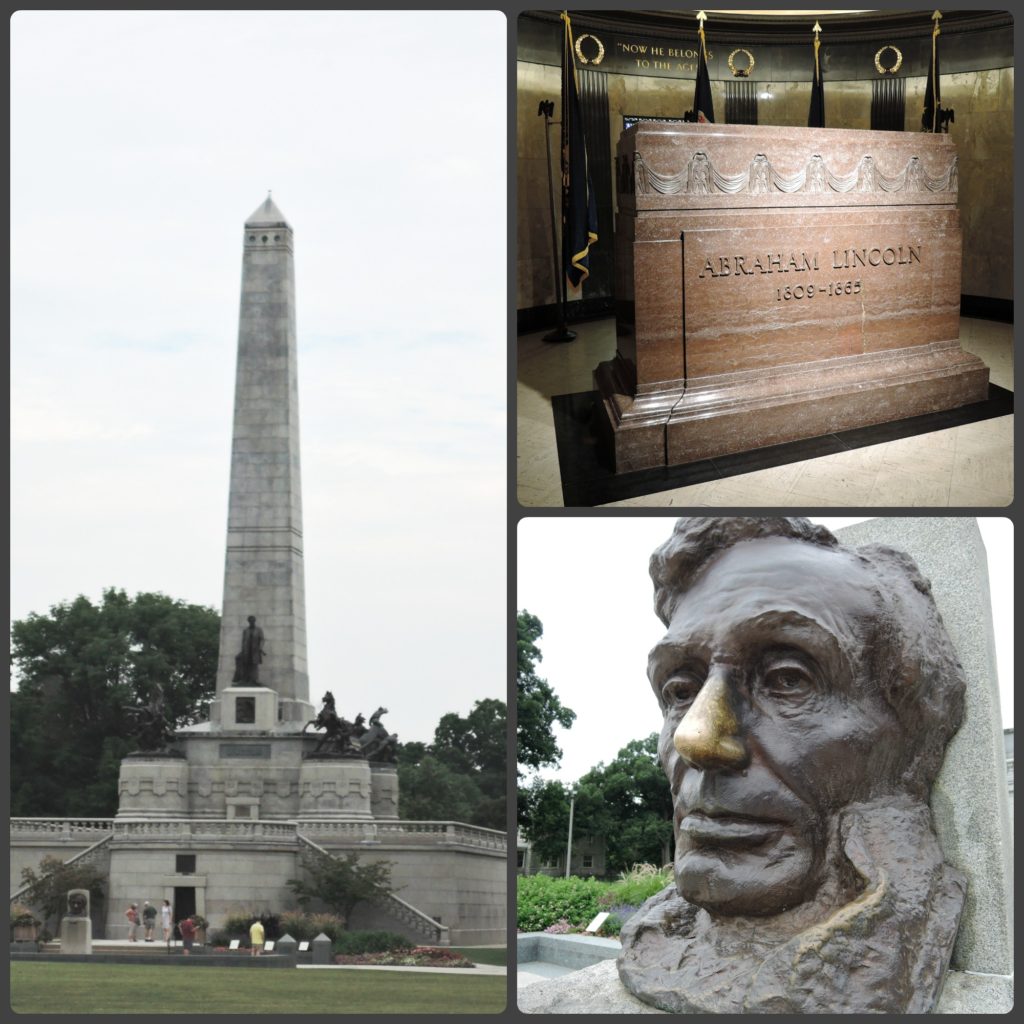 We started our tour of Abe Lincoln’s Springfield backwards – by visiting his tomb first. The fairgrounds is a few blocks from the historic district and we walked down tree-lined streets, past tidy houses built in the 1900’s, to Oak Ridge Cemetery where Lincoln’s tomb is located. The towering obelisk is flanked by enormous bronze statues commemorating the Armed Forces under Lincoln’s command – Calvary, Artillery, Navy, and Infantry. Sixty-five cannons left over from the Civil War were melted down to create these statues. The marbled interior of the monument contains Lincoln’s tomb and the resting place for his wife and several children. 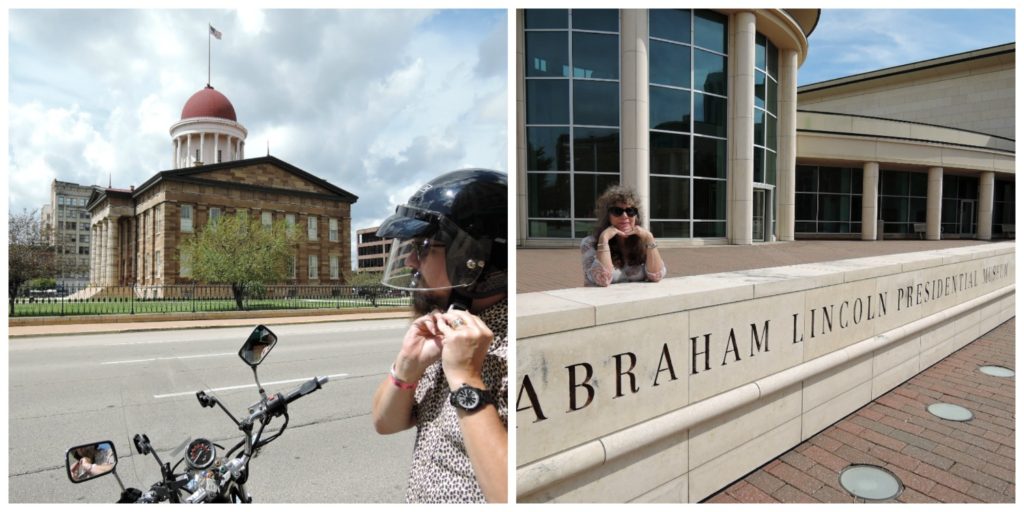 Downtown Springfield is a dozen blocks from the fairgrounds; a perfect motorcycle ride through shady neighborhoods into the State Capitol area. Straddling Sixth and Jefferson Streets is a large complex, the Abraham Lincoln President Library and Museum. We entered the museum, and I was expecting it to be yet another dusty yawn of facts and figures. I couldn’t have been more wrong.

Without exaggeration, this is the best historical museum we’ve seen. The presentation and displays were lively, intimate, stirring, and clever. The museum drew us in and held our rapt attention for over two hours. The experience begins in the lobby where costumed docents wander freely to greet you. Lincoln’s history unfolds in a series of display rooms from his early days as a pioneer settler to his path to the White House. Life size figures are in fully decorated rooms that place you directly within the scene, instead of merely being a viewer. The windows blew a cold draft, the wood stove was warm to the touch, snores are heard from under the coverlets. And the figures were the best I’ve ever seen. You could nearly reach up and catch a tear falling from a slave’s eye. 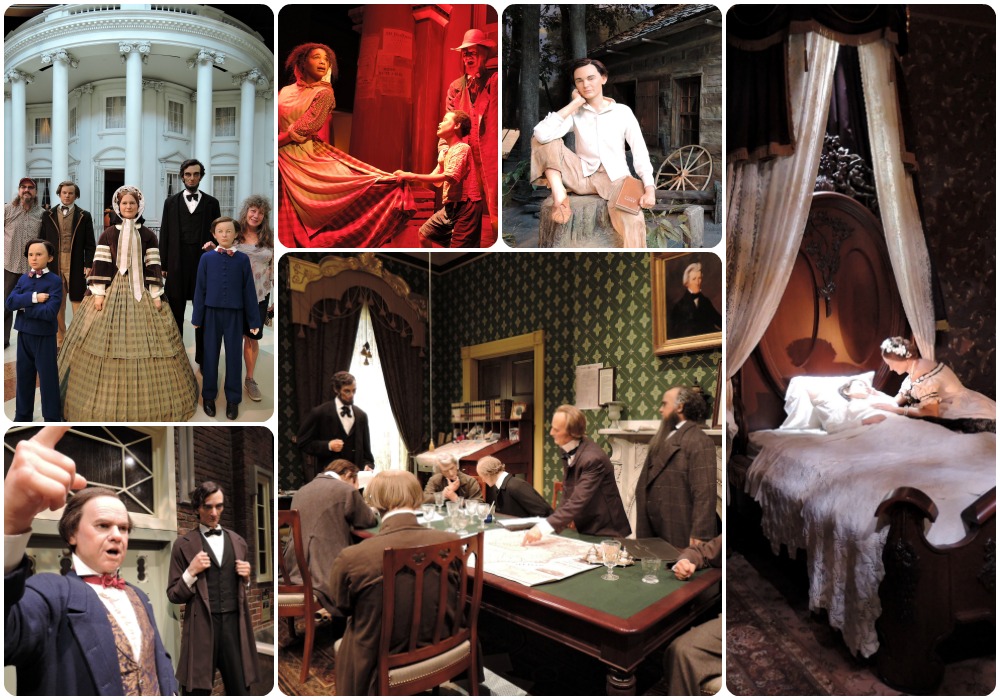 Each diorama was staged down to the tiniest detail, such as scraps on the floor, flickering lights, and street sounds coming from the windows. One room presented the entirety of Civil War battles on an animated map, from beginning to end, in four minutes. I was quite moved with the funeral room, which recreated Lincoln lying in state in the Springfield State Capitol. There were also two theater presentations that were simply astonishing, including a holographic actor and theater seats that rumbled with sound effects. First class and better than Disney. 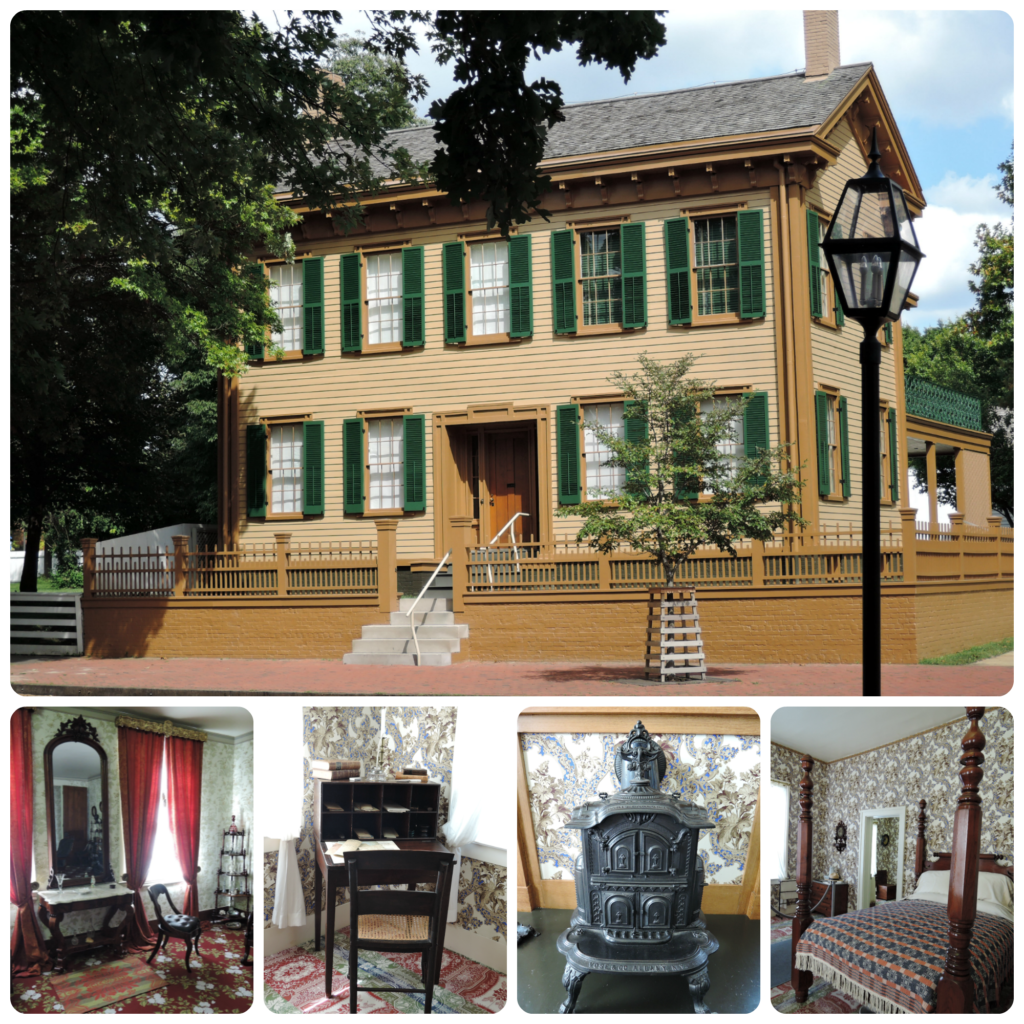 Traveling a few blocks south is Abe & Mary’s two-story home where they lived for many years. Their house and the surrounding four blocks of the neighborhood are preserved as a National Park Monument. Free tours are available through the Lincoln home and 80% of the furnishings are original to the Lincoln’s. 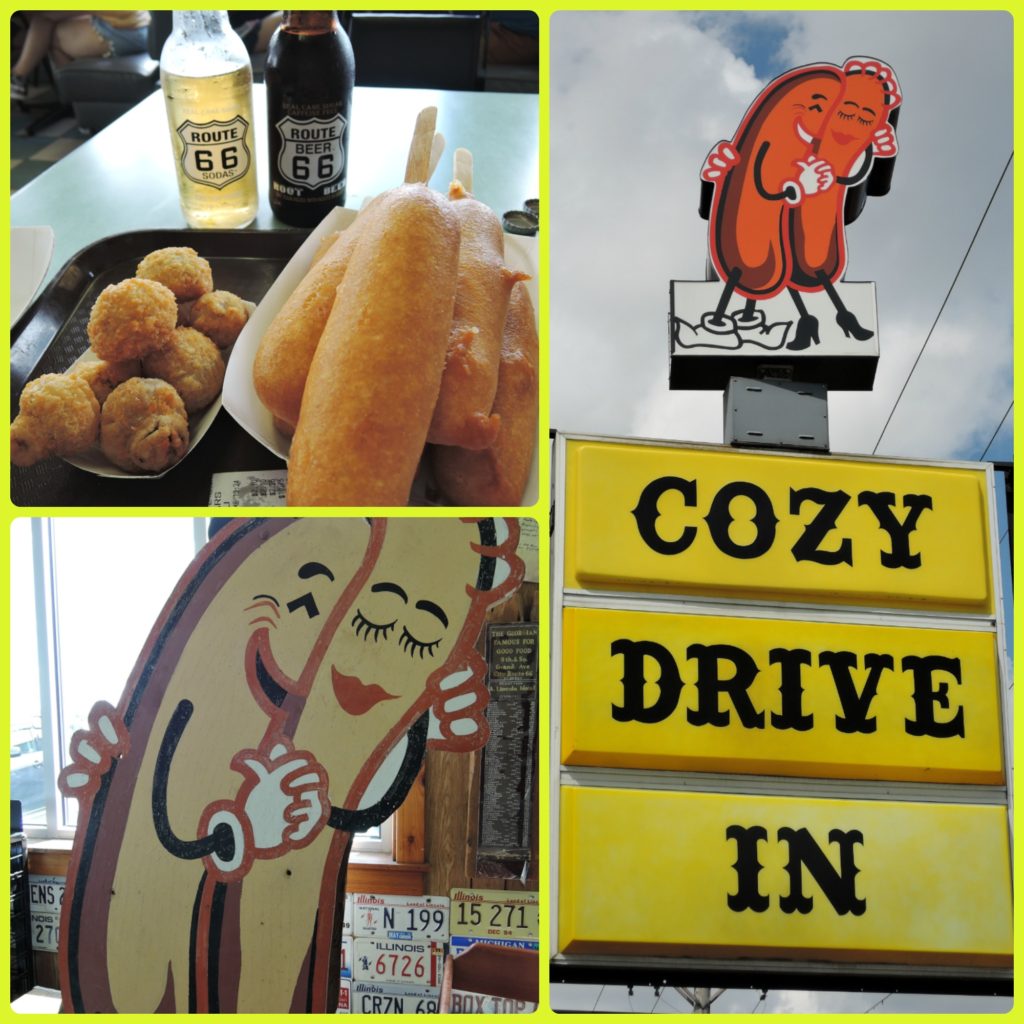 We stopped at a slightly more modern historic spot for lunch – Cozy Dog Drive In. This roadside diner was on the original Route 66 highway and claims to have invented the corn dog. We ordered six.

Springfield is a big town, population 117,000, but we were content concentrating on just the historic parts. It’s our History Lesson Summer Tour. 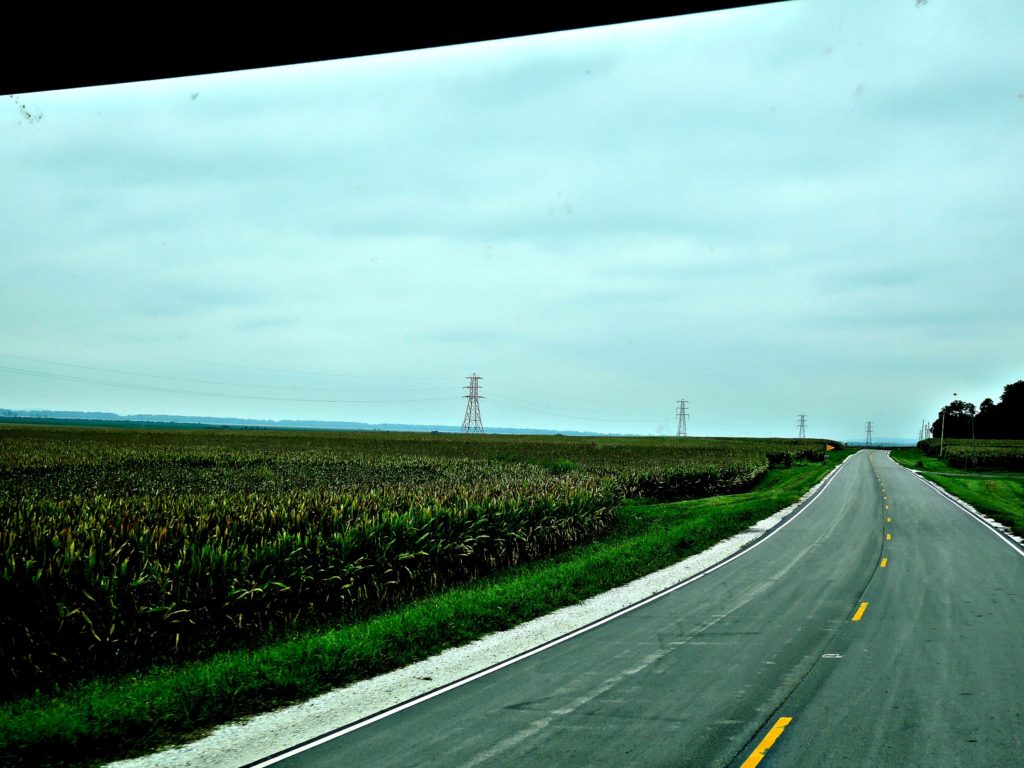 Driving an RV through a major metro city isn’t on the top of my Fun List. So skirting around St. Louis on the secondary county roads was how the day was spent. From Carlyle we pointed north about 175 miles, and got a good look at thousands of acres of corn and the tiny farming towns in between. The roads were straight and smooth, and we made steady miles with hardly any traffic except the occasional tractor puttering from one field to another.

This flat prairie, with its predominant color of drying corn stalks, abruptly turned verdant green as we approached the Illinois River. The corn rows gave way to thick woods and rolling hills along The Great River Road of Illinois. 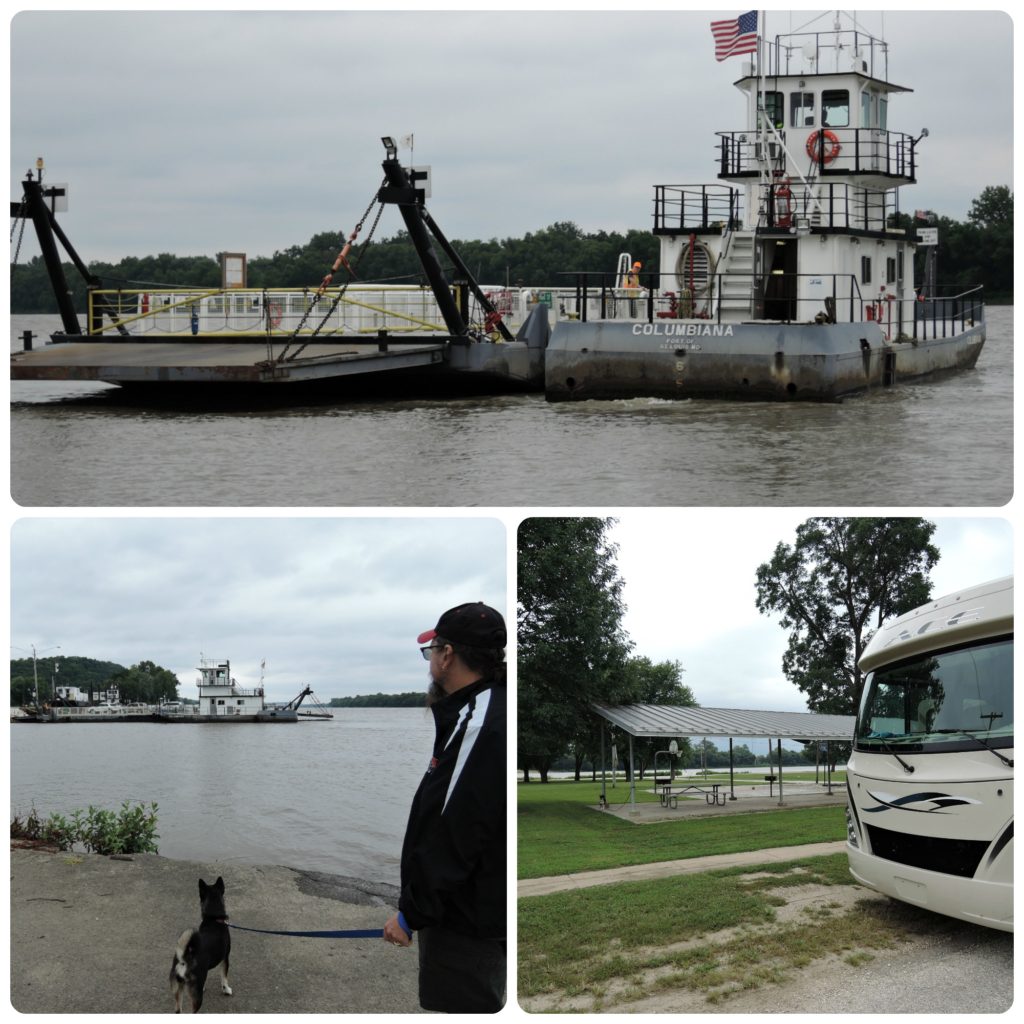 Crossing over the Illinois River we stopped for lunch in Kampsville. There was a swell picnic pavilion with a good view of the free ferry running back and forth across the river. Why the ferry transits here in this one-lane town I’m not sure, unless it’s to avoid the ancient (almost one lane) bridge we crossed in Hardin nine miles downstream. That would be worth avoiding – kinda like St. Louis. 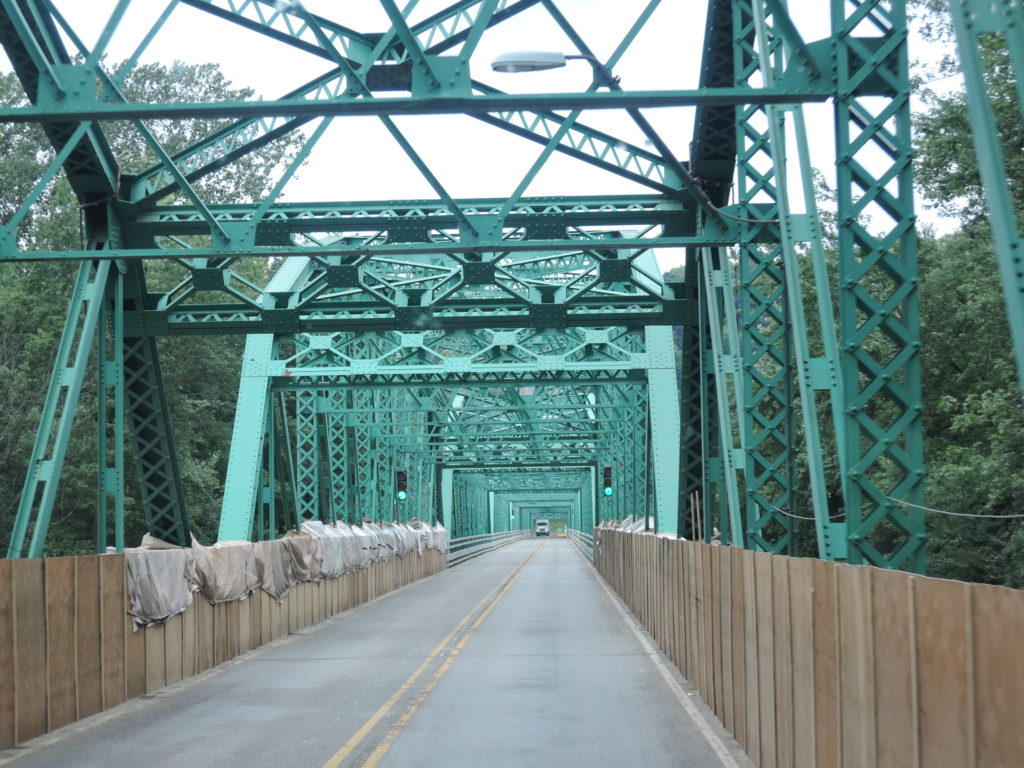 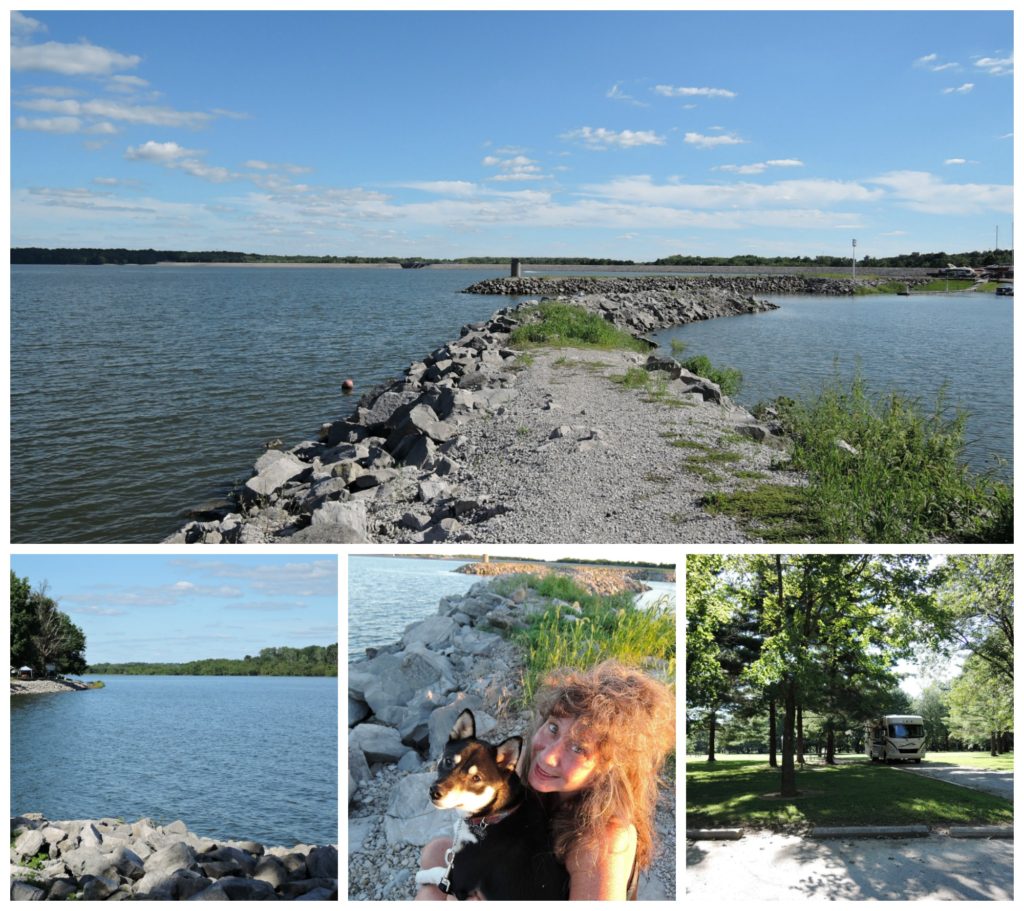 In southern Illinois, we are once again enjoying the efforts of the tireless Corps of Engineers. Back in 1958, the CoE flooded the plains surrounding the Kaskaskia River to create the 26,000 acre Carlyle Lake as a reservoir. Two dams are located here, and we are staying at Dam West campground. It’s a splendid spot, with enormous camp sites, mature trees, and in full view of the sparkling lake. 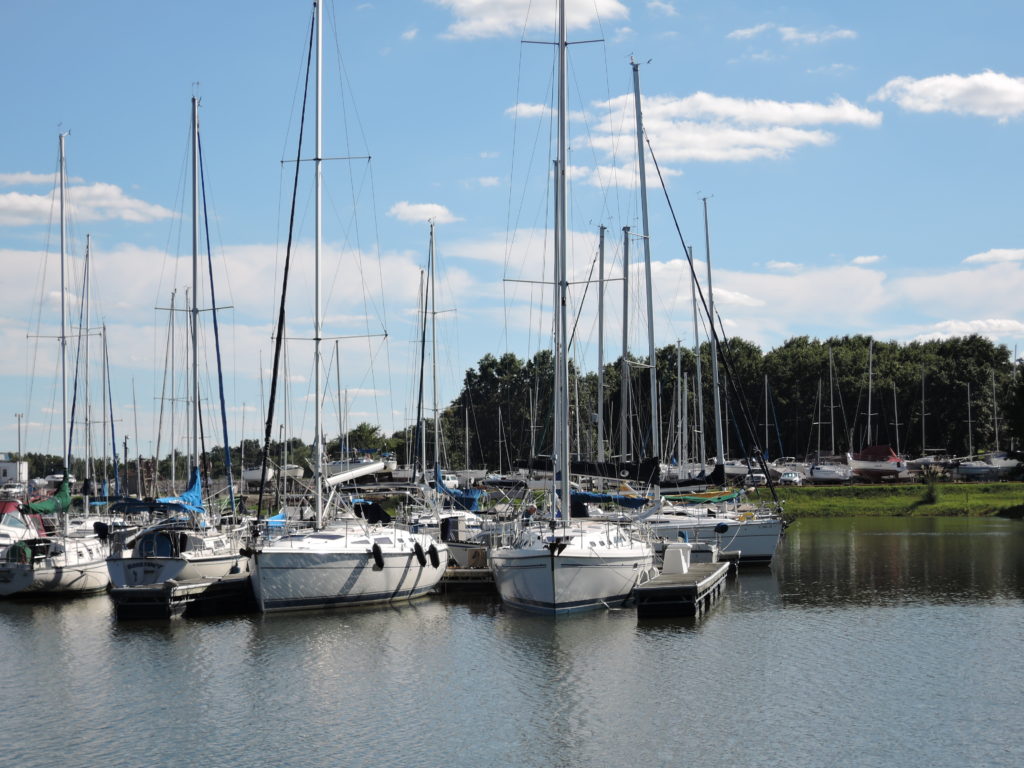 This lake is a big draw for the region as a sailing spot, and the marina was all masts with nary a motorboat in sight. Other than Carlyle Lake, the surrounding country is a bit unremarkable, save for thousands of acres of corn and an occasional tavern at a lonely crossroad. Big Agra business is seen in the form of giant granaries and milling operations, most locally owned and family operated. We have crossed into what’s called America’s bread basket – the flat prairie that eventually yields to the Great Plains.

Chicago is a beautiful city, filled with friendly Midwest folks and some of the finest restaurants and stores in the country. And the startling green water of Lake Michigan adds a special backdrop to the extraordinary architecture. It’s always been one of my favorite cities, and now especially so because our good friends, Andy and Maxine, have a second home right in the heart of downtown. We spent a couple of wonderful days exploring the town with them, being chauffeured in style and treated to their favorite places, all within walking distance of their grand 39th floor apartment. 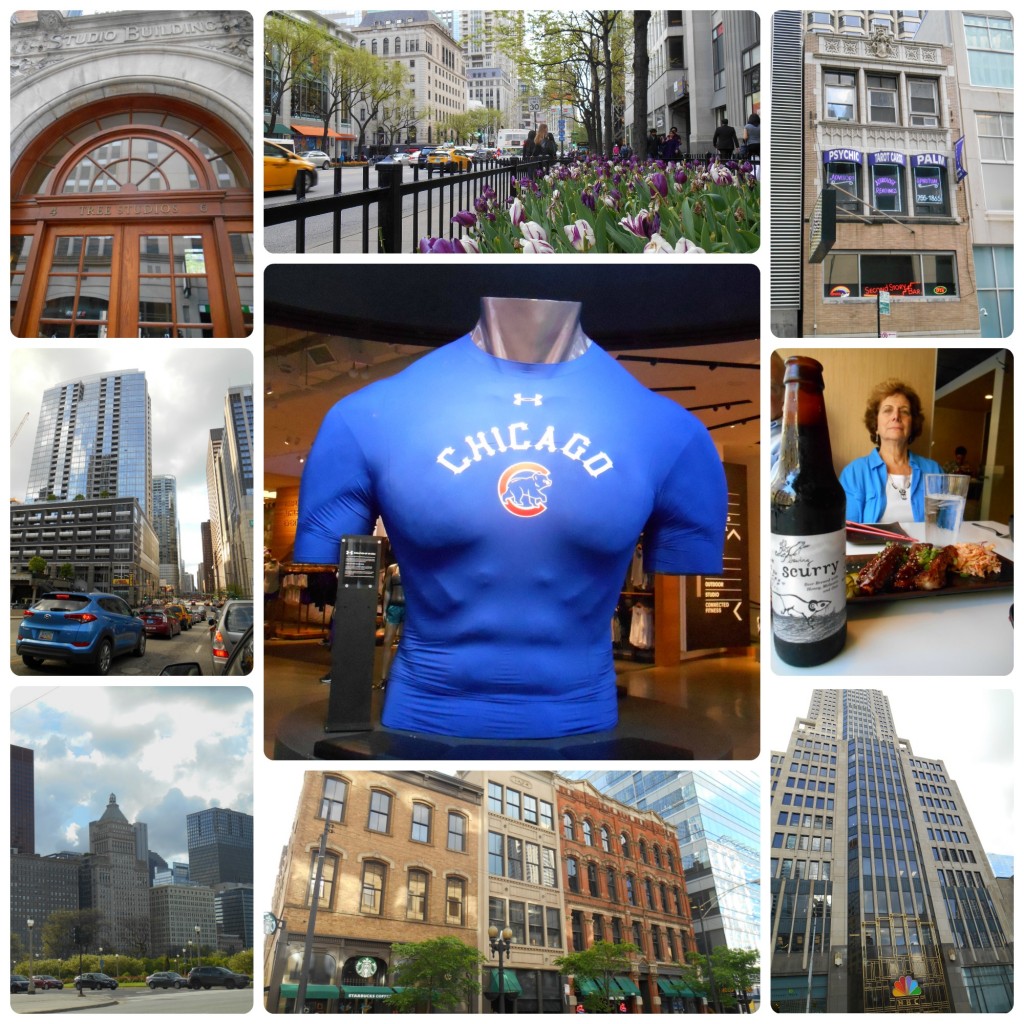 Back on ground level, over by the giant McCormick Place Convention Center, we are dry camping at one of Chicago’s best kept secrets – the Marshaling Yard. Here a half dozen RV’s are lined up next to tour buses and semi-trucks in a 12 block parking lot squeezed between Lake Shore Drive and the commuter train line. It’s a busy yard with trucks coming and going, but fortunately quiets down at night. There are no amenities here, you’ve got to bring your own water and power, but for $35 a night it’s hard to beat the downtown location. 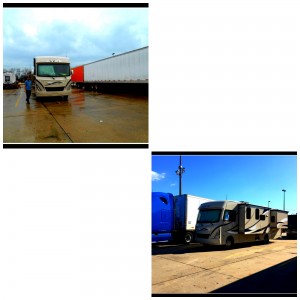 We spent a gorgeous afternoon wandering around Navy Pier in between rounds of dining at fabulous restaurants. A huge Italian grocery store called Eataly was an experience all its own. Not only do they have a dizzying array of cheeses, meats, pasta, and desserts, but each grocery section has its own cafe where you can order up any Italian goodie you can dream of and eat it right there. I didn’t want to leave! 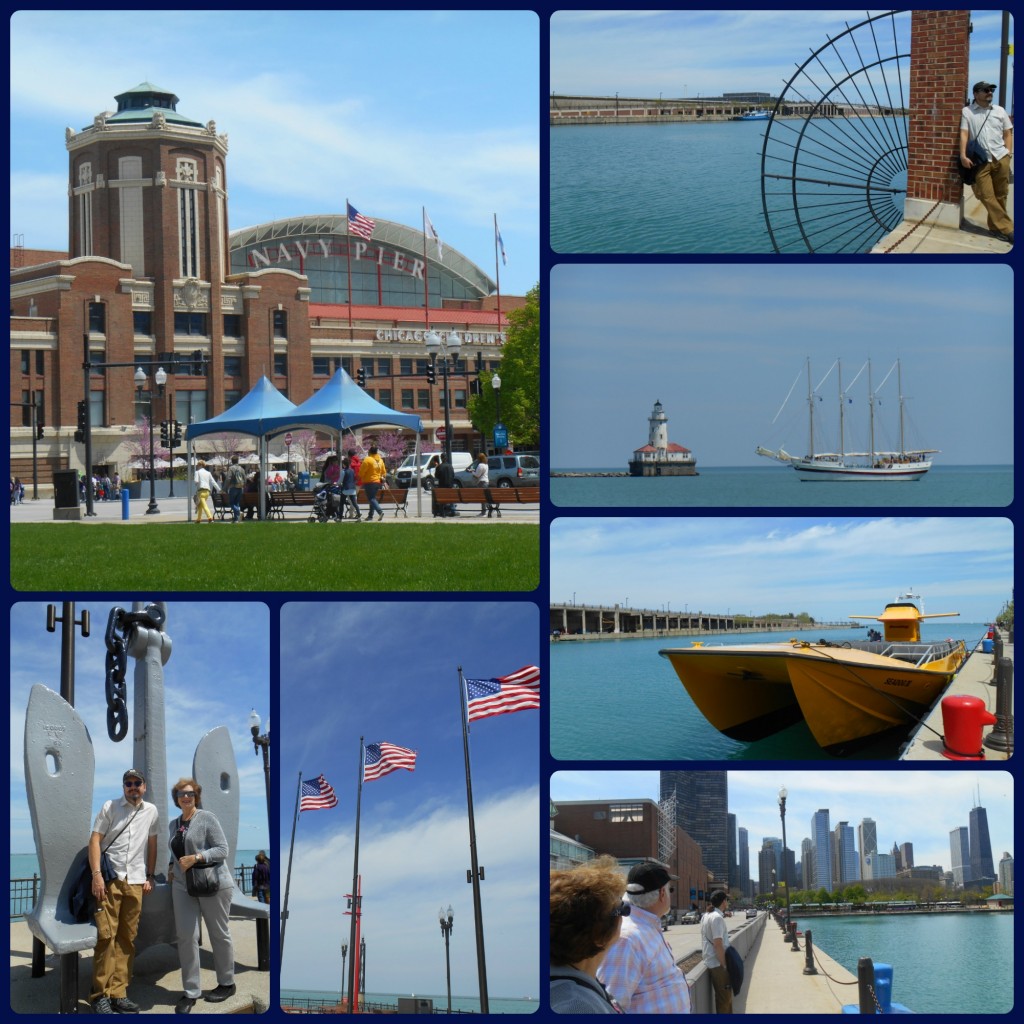 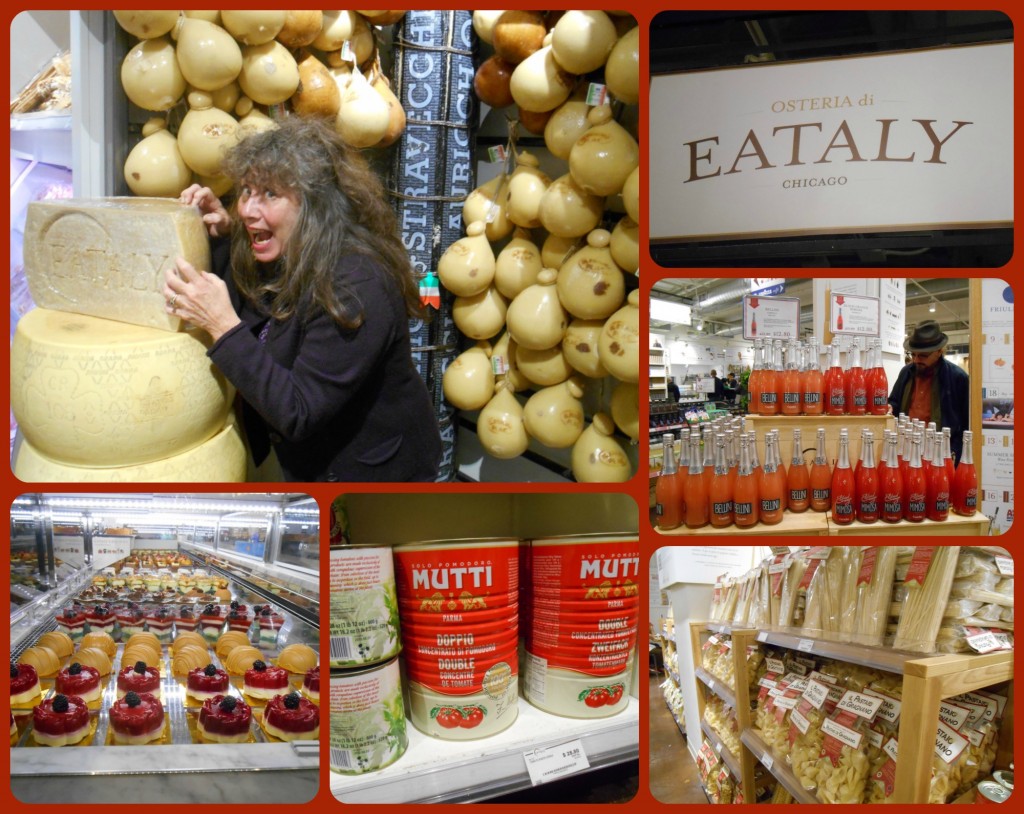 We had a great time with our friends and it reminded me how I much love a big, sophisticated city with all its cultural diversity and exciting street life. Love it, as long as I can return to toes in the grass and hugging trees. Which will be our adventure tomorrow when we head east… 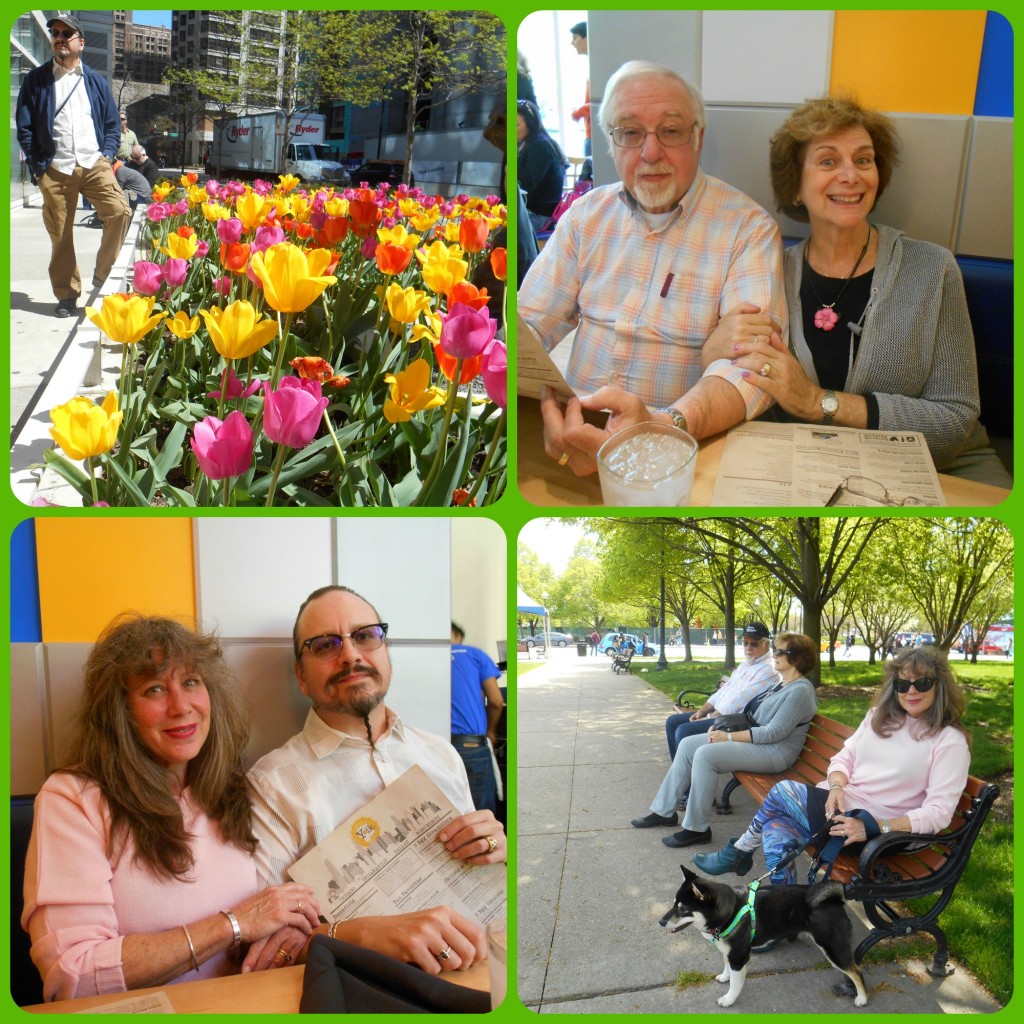