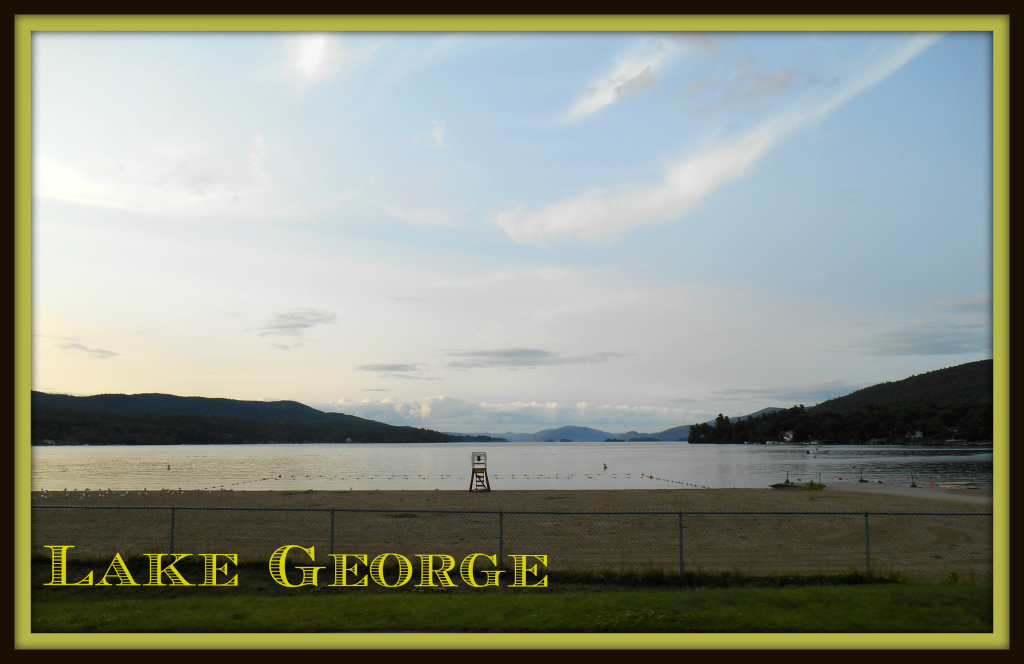 We have been climbing through the mountains this vacation – the hill country south of Pittsburgh, the Alleghenies, the Poconos, and now we are settled in the Adirondacks.

The drive has been more strenuous than usual, given all these mountains to chug up and then freefall down. And being summer, all manner of road construction is underway. So much attention must be paid to the road and tight grip kept on the steering wheel, which makes us a bit worn out at the end of the day.

We’ve landed at King Phillips RV Resort in Lake George, NY and made a cozy camp. The awning is out and a comfy patio has been outfitted with rug, chairs, table, and tiny solar lamp. Our mascot, Wendell the Chain-Saw Carved Bear rests alongside, and the hammock is strung between two towering elm trees. Our campsite is outfitted with water, electricity, cable TV, and a sewer hook-up, which we are finally taking full advantage of after 5 years of carrying around a “donut” fixture that connects the sewer hose to the inlet.

This resort campground is an interesting mixture of transient campers, like us, and seasonal renters who have RV’s but with elaborate patios and gardens which are showy evidence that the owners return here year after year. We’ve seen this type of New York lake park before in Chautauqua, and it still charms. 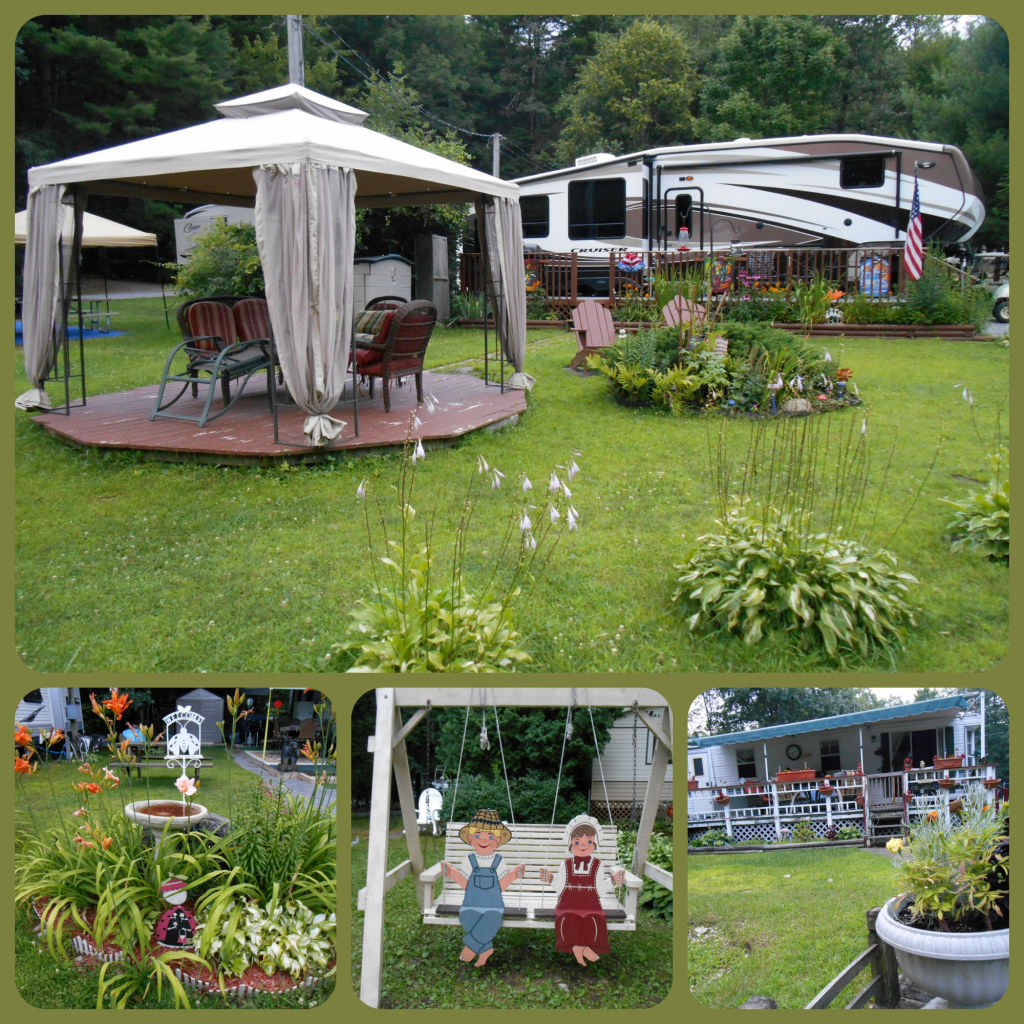 Tonight we hopped on the motorcycle and cruised the main drag on Route 9 to the Prospect Diner for a great dinner that I didn’t have to cook. The short drive required a sweater plus jacket and gloves as it’s been unseasonably cool this week – something I won’t grumble about too much after escaping the humidity and heat of the Ohio Valley. 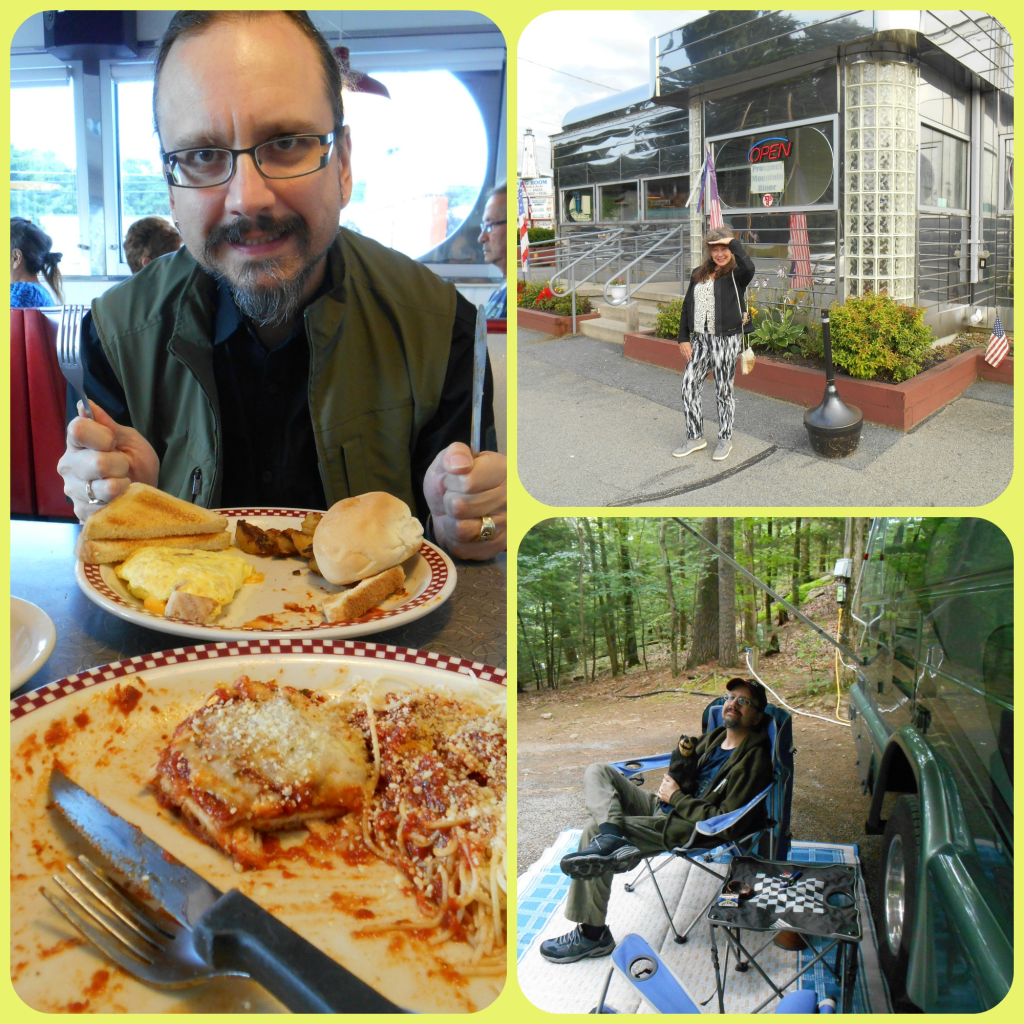 Our campground is located on Bloody Pond Road (ewww!). Heading back from dinner we drove past the camp to find out if there really is a bloody and haunted pond. Instead we found a lucky shortcut to Lake George and the main shopping district. We’ll take this route tomorrow to explore the downtown area. 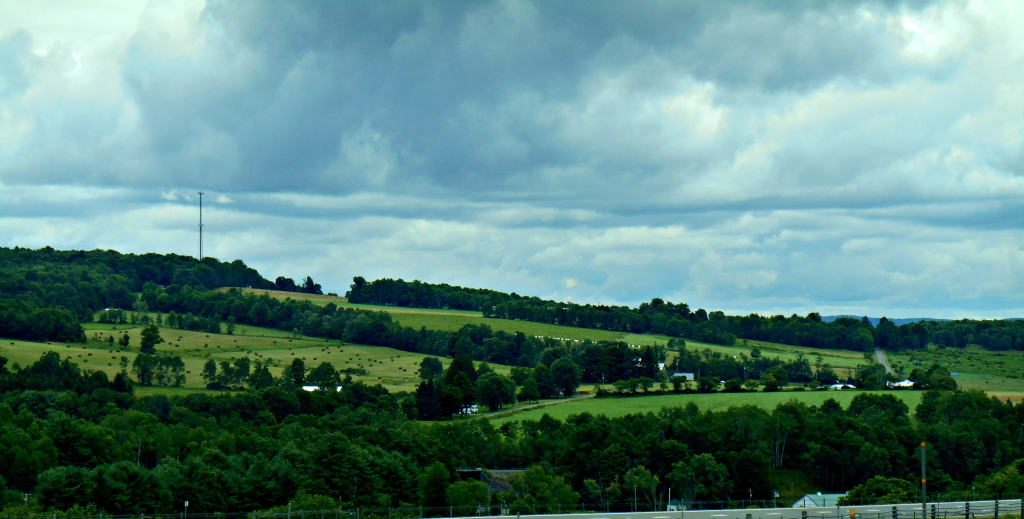 Escape To The Lake!

We have left the hospitals, doctors, and Canton behind. Tim was released Tuesday night for good behavior (he studied hard for his lab exams). He’s a bit wambly and moving slow, but definitely on the mend. They’ve put him on a low fat diet – game changer! – and he’ll need to have that pesky gall bladder removed in the future.

We packed up slowly this morning, and the owners of Bear Creek Resort treated me to a ride on their giant teeter-totter. It’s 20 feet long, and swings you waaaay up in the air. A few days ago they saw me sitting forlornly on the seesaw, all by myself, no one to play with. So after hearing that Tim was well and we were leaving soon, Carol sent her husband, Lee, to fetch me. She climbed on one side of the giant beast, Lee helped me up on the other, and away we went!  They have been mighty sweet, letting me have open-end reservations in the middle of the busy summer season while I waited for Tim to heal. Should you ever be in the Canton area, this is the campground I recommend. 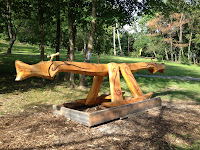 On our way at last, we motored north a few hours to enjoy the placid waters of Chautauqua Lake in northwestern NY. Now we are caught up with our vacation schedule after a three-day delay.

We’re staying at Camp Chautauqua which is an interesting mix of short-term campers and permanent summer homes – lovely little manufactured houses with enclosed porches and patios. 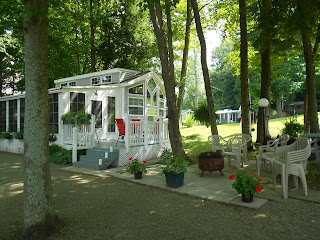 We had reservations here all week, and just managed to catch the last of the pre-paid nights. We had planned to tour the area for several days. What we missed was the following:

Chautauqua Institute – famous for its scientific and political lectures & courses.

Lily Dale – fabled medium & psychic town since the 1890’s, where we had tickets to attend an afternoon workshop.

But hey – who cares!  Everyone is well, the pack is intact, and we’re lolling by the campfire. Can’t get any sweeter than that! 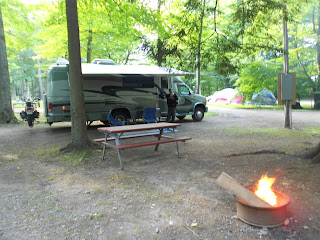