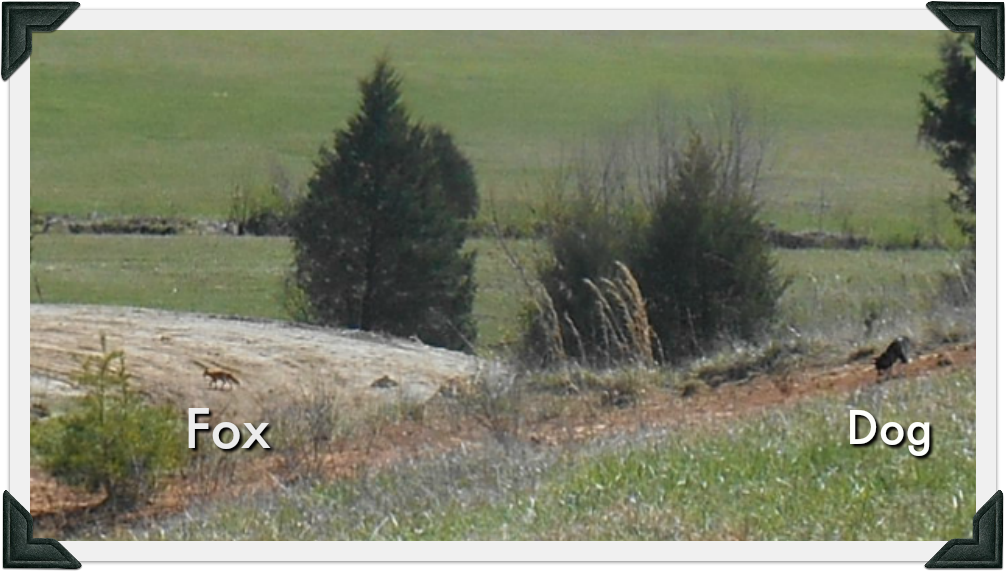 Quirky dogs who make us laugh earn an Indian name around here. Previous pooches had names like Kicking Bowl and Nose In The Door. We’ve been calling the puppy Steals One Shoe after an obvious habit.

But today’s events were extraordinary enough to mark the occasion with a new Indian name for Coco – Dances With Fox.

There’s a family of Red Fox who live in our barn. They’ve denned there for years, making elaborate tunnels under the floorboards, each entrance headed by a heap of soft dirt decorated with paw prints. Lately Coco has been rummaging through the barn in what is the equivalent of a fox garbage dump – odd bits of bones and feathers strewn around the stalls. And each morning she returns with an old dried-up prize – a turkey wing, a turtle shell, a squirrel tail. Leftovers from a fox dinner. 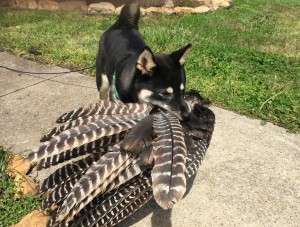 But yesterday Coco came back with a fresh bunny. Not the bones or a bit of fur. The whole rabbit. “She’s stealing from the foxes,” Tim said. We stuffed it in the garbage can and worried that Coco was now actually entering the fox’s den instead of just being content with their leftovers.

Today that was pretty much confirmed as the Red Fox harassed Coco, nose to nose, right out in the open. Nearly the whole afternoon the fox defended her turf while the dog was thrilled to have someone to chase. They were the about same size, 20 lbs apiece, with the fox sporting a long bushy tail held straight out. The two ran circles around the barn – chasing, leaping, pouncing, dancing – all day long.

The fox’s bark was similar to a baying beagle, with a slight yodel at the end that signaled alarm. The dog was having a grand time but the fox was much more serious.

I grabbed the camera but only managed to squeeze a long-distance shot as the fox trotted off in a momentary stalemate between rounds.

A short while later Coco came rolling back with another rabbit – this one of the domestic variety. It was certainly the fox’s hard won supper, no doubt pillaged from a neighbor’s warren, and meant to feed her family of kits.

After much cajoling and waving of arms we finally got the thing away from the dog. Figuring the fox family had now been robbed of two meals in a row by our pilfering pooch, we left the rabbit at their den entrance and tied up the dog for the rest of the day.

Which didn’t make Coco happy, but now we know the answer to the popular question –

What Does The Fox Say?

bwahahaha! they’re gonna be good friends by the end of the season.