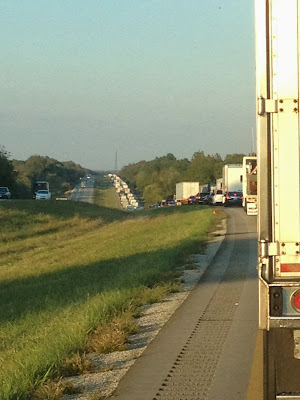 You’ve heard about it, read about it, and seen it on TV…The Epic Traffic Jam.

Yup, we were one of those poor schmucks stuck in a legendary snarl. Six hours at a dead stop on the Interstate. Most fortunate that we were in the motorhome – potty and refrigerator at hand!

We were heading up north, cruising merrily along on a beautiful day, when around 4:30 the traffic came to a stop. Aw, it’ll clear up, just a little fender bender. Ohhhh…but noooo. After a while of no movement at all, folks started getting out of their cars, stretching, complaining on cell phones, peeing in the margins. We turned off the engine and waited.

Hours stretched by. Nowhere to go. Can’t turn around. No exits in sight. We took the dog for a walk. Made a snack. Laid on the couch. Watched some TV.

Every 60 minutes or so a bit of hope would arise. Truckers would start their rigs, everyone would  jump back in their vehicles, and we’d move…about 100 feet.

Afternoon gave way to night. Our side of the highway was a line of dark cars and semis – everyone conserving gas and batteries. Knots of stranded folks formed in the aisles, trading what little news there was about our situation. Surprisingly, people were pretty calm. 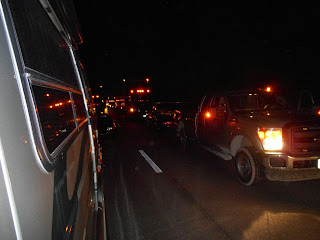 Word was that a tractor trailer had overturned, then caught fire when it was being hauled away. It was carrying a load of powdered animal fat that kept igniting and spreading across the pavement. It got so bad that airport crews were called in to foam down the wreckage.

Around 10:30pm we had crawled to the site of the accident. We picked our way through police, firemen, excavation crews with backhoes, and a quarter-mile line of dumpsters. What a mess!

Finally made it to my folks house at midnight, six hours too late for supper.

Here’s hoping once was enough!

Down By the Old Mill Stream