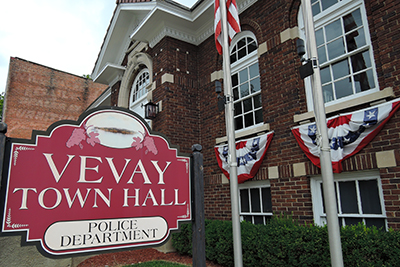 I’ve continued a short distance north from Madison to Vevay, Indiana. The locals pronounce it Vee-Vee, and they can tell you’re a tourist if you say it wrong. 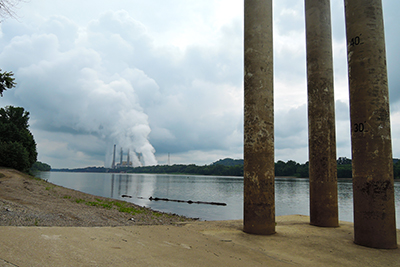 Vevay is a river town and I found a good place to park the RV on the waterfront at the end of Ferry Street. I considered putting the coach under a big 30′ light pole where the parking lines were marked, but changed my mind and parked under some shade trees instead. That was lucky because when I returned the city maintenance workers were removing that same pole with cranes and bucket loaders. There would have been holes in my roof from all the loose bolts raining down! 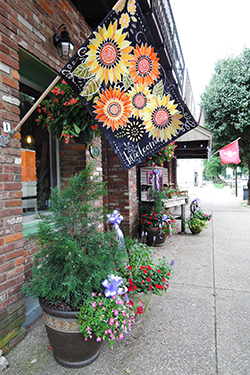 Vevay was founded by immigrants from Switzerland in the early 1800’s. Their most prominent citizen was Ulysses Schenck – a busy riverboat shipping baron. He invented the Hay Press, earning him the nickname The Hay King. Selling hay was big business back then, and it was shipped all over the country via riverboat. If you’ve ever seen a hay press barn it’s pretty – well – impressive. These were huge structures which compressed hay into giant 600 lb. blocks. Vevay once had 12 of these hay press barns, one of which still survives. 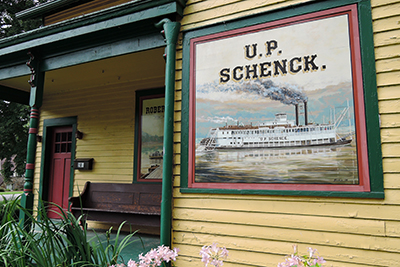 Vevay still celebrates its Swiss heritage with the annual Swiss Wine Festival. My visit was a few weeks early to catch the festival, but the town was already busy making preparations and everyone encouraged me to return at the end of August. 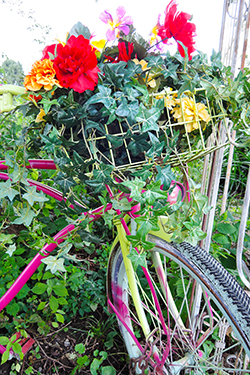 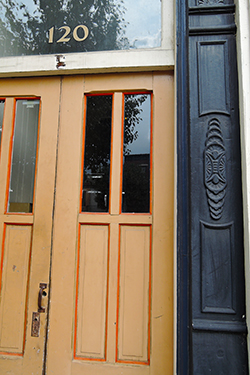 The dog and I walked around town for a few hours and stopped by the museum for a look at local artifacts. There’s a couple of big mansions along the side streets, a testament to the town’s former prosperity. Today there are a smattering of cute shops and restaurants along Main Street. 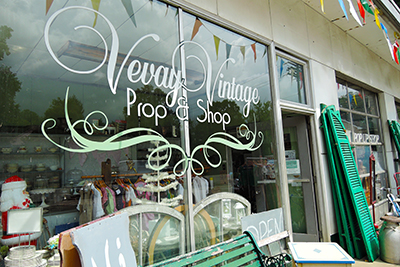 Evening found us camped five miles north at Follow The River RV Resort. The campground is located along a rural stretch of the Ohio River Scenic Byway, so there’s nothing within walking distance except soybean fields. But there’s a free shuttle service to nearby Belterra Casino, so of course I went there the next afternoon. 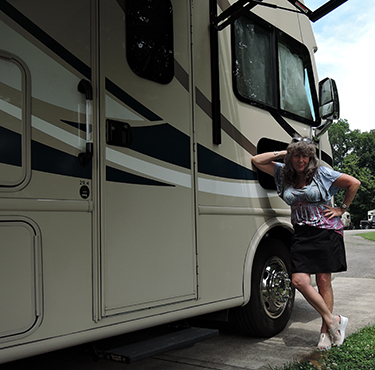 Okay, I’m just going to say it – there’s nothing sadder than an empty casino on an off-day. 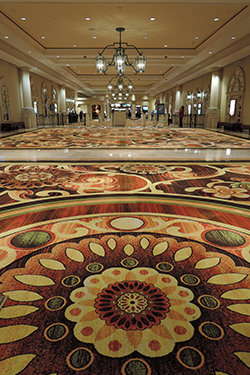 I walked all around the complex, looked in the empty shops, woke up the clerk at the spa who seemed surprised to see a customer, and eventually gave in and boarded the casino. Belterra is actually a floating boat, leftover from the decade when Indiana only granted gambling licenses to riverboats. I found my way outside to the upper deck and indeed there were life jacket lockers lining the rails. From the looks of things, I was the only visitor to the observation deck in a very long time. 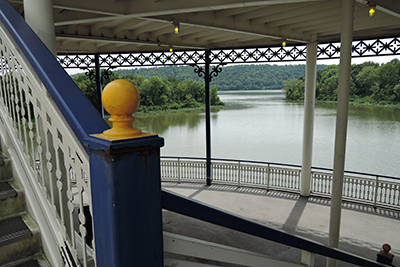 Finally there was nothing left to do but gamble, so I sat down at the roulette table and promptly lost $20. But I did find a quarter in the parking lot as I waited for the shuttle to take me back to the RV. Hay, hay! 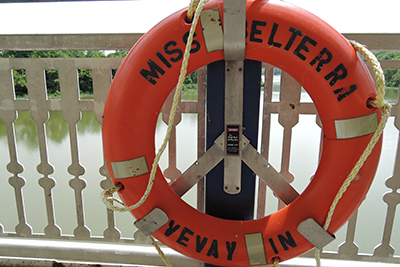