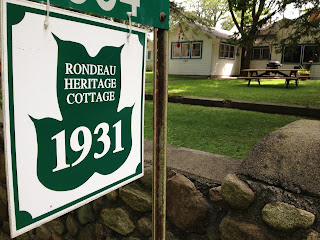 Toured around Rondeau today, starting with a Butterfly Hike with the park rangers. The tour began at the Visitor Center which is on the far point of the peninsula, near the swampy marshes. We suited up in long pants and jackets because the mosquitos are “the worst in years” said the ranger, her face covered in welts.

If you walk through the trees, or approach any vegetation on the margins, you’re swarmed immediately. I’m talking clouds of mosquitos, which attacked our hiking group with fury and carried away two little tots in bathing suits. No, just kidding. They only took the boy. 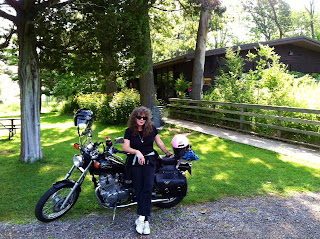 Luckily once you reach the open air the vicious bugs abate, so we were often running for our lives toward the sunlight. Over on the bay side, there’s a 7km trail through the thick of the marsh and that became our joke – “Let’s hike the marsh!”  You’d need a Kevlar suit to survive.
The Visitor Center had some good exhibits, and many live animals on display to show the diversity of wildlife in the park. I liked the turtles best. 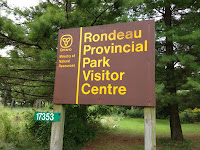 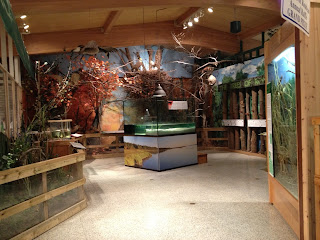 We’ve been surprised at the number of tent campers in these Ontario parks. Maybe it’s just the campgrounds we visited, but tents comprised most of the sites. There’s a few trailer campers, even fewer fifth-wheels, and motorhomes of any size are a rare sighting. The tent campers have colossal tarps spread over their entire site, strung between the trees and big enough to be a boat sail. I’d sure like to know where they buy such large tarps! 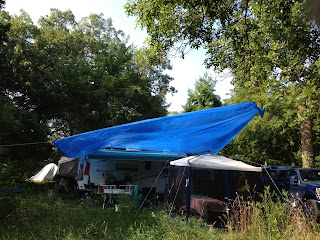 We lunched in the coach (saucisses au poulet), and then spent some time on the beach. There’s a dozen or so access points in the park that lead across the dunes to Lake Erie. Caught a few rays and searched the beach for rocks – a favorite pastime. 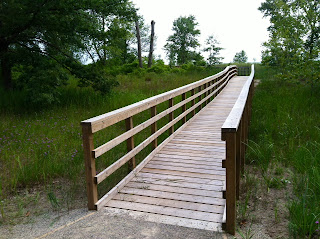 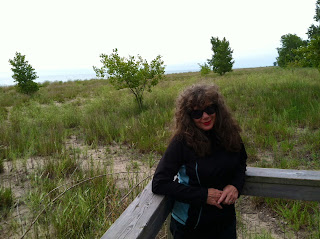 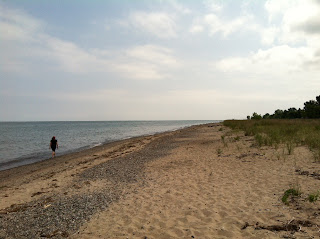 Supper was again enjoyed at Rondeau Joe’s, a pleasant pub at the park’s entrance, where we sipped local pints of beer and hard cider and spent the last of our Canadian currency. 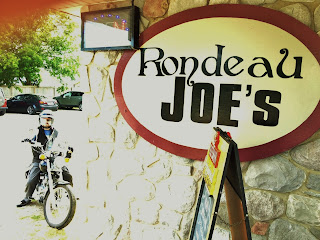 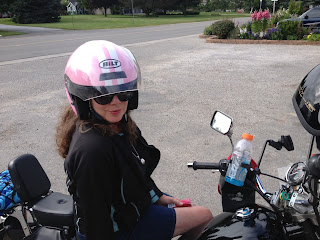 Tomorrow we’ll head for the Ambassador Bridge in Detroit and hope the crawl through customs isn’t too long. I’ll wait to post the blog until I get American WiFi service, so I won’t run up another big bill like I did the last few nights!